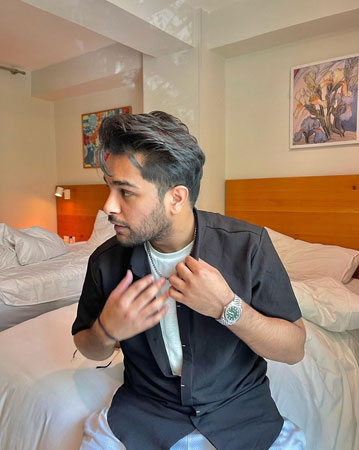 If Asim Azhar’s recent release ‘Chal Jaan De’ had you craving more of the singer’s voice, he’s got you – his latest song ‘Habibi’ is here to save the day.

Azhar dropped the song on Monday captioned, “Had a fight with your partner and you don’t know how to make it up? ‘Habibi’ – the new song by Asim Azhar – is the song for you. It’s the patch-up song of the season and a whole new vibe. Listen, feel and rekindle the love.”

The official video is a slideshow of artsy, animated stills with the lyrics playing on screen. With bright neon lights and the ‘Jo Tu Na Mila’ singer holding an umbrella as the screen shows raindrops falling in slow motion, it sets the perfect vibe for this monsoon season.

As promised by the singer, his “Eidi” is here.

Musicians Aima Baig and Aahad Nayani sent their love in the comments under the video.

Actor Sajal Aly really vibed with the song – enough to play it on her plane ride. Actors Zara Noor Abbas and Faizan Sheikh enjoyed the track as well.

Azhar’s fiancée Merub Ali is always there to support him. The ‘Ghalat Fehmi’ singer has a TikTok with his single out already.

The song crossed 200,000 views on YouTube under nine hours and currently, it has surpassed 600,000 within 24 hours. Have you listened to ‘Habibi’ yet?