Govt trying to break up PTI through Article 6

* Imran Khan 'hurt' by SC ruling, urges inquiry into cipher
* Says he will hit two wickets with one ball on July 17 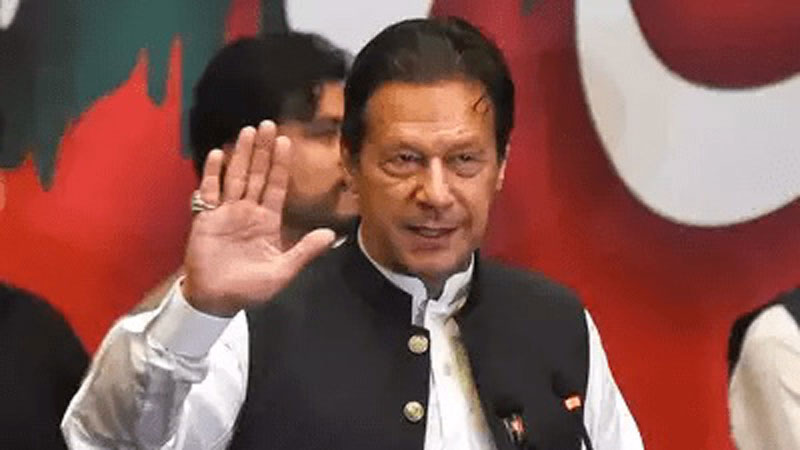 PTI Chairman Imran Khan Thursday said he was ‘hurt’ by the Supreme Court’s judgment in the suo motu case of former National Assembly deputy speaker Qasim Suri’s ruling and requested the top court to conduct an inquiry into “who did the Americans convey their message to regarding change of government if it was not the Foreign Office and the country’s ambassador?”

“I was hurt by the Supreme Court’s judgment,” he said while addressing a public meeting in Dera Ghazi Khan in connection with the July 17 by-election in Punjab. In a detailed judgment on the no-confidence ruling, the court noted that no inquiry was ordered into the matter to ascertain the nature or extent of involvement of any person in Pakistan to seek or receive the support of a foreign state to move the no-confidence motion.

“The reservation on the part of the NSC to recommend stronger measures against the alleged foreign conspiracy probably reflects the inadequacy of the material to take more assertive action. This perhaps also explains the lackluster response by the PCS and the members of the treasury in their respective meeting and sitting of 31.03.2022.”

However, Imran claimed that there was evidence as he said that he presented the “cipher” before the then federal cabinet, adding that he also had the minutes of the meeting.

Khan asked the courts that when a US undersecretary “threatens” a sitting prime minister of a nation of 220 million people, then isn’t it an embarrassment for the entire country.

Apart from criticizing the SC’s ruling, Imran castigated Chief Election Commissioner Sikandar Sultan Raja, saying that the nation “would not forgive him” for supporting the incumbent government.

He said the CEC’s spokesperson had him to back his allegations against Raja. “Why should I respond? You are answerable to me.”

The PTI chairman alleged that he had evidence of the CEC’s meetings with Punjab Chief Minister Hamza Shahbaz and PML-N Vice President Maryam Nawaz.

“Chief election commissioner, why are you taking your team to Lahore? Remember, the nation will not forgive you.”

The PTI chairman said the nation felt insulted after hearing that the apex court thinks no investigation was carried out to find out the truth about the diplomatic cipher, says a news report.

He highlighted how incumbent President Dr Arif Alvi also sent the matter to the top court, but SC refused to investigate. He deplored how courts take a suo motu and open at midnight but when he was being removed as prime minister, everyone was sleeping.

Imran told the crowd that they all will soon find out who was Mr X and Mr Y tasked with rigging the elections in the favor of the “imported government”.

“Shehbaz Sharif has always played matches after taking umpires on his side,” he said and asserted, “Even if you take the umpires on your side, you will not be able to win.”

Urging the charged crowd to fight till the last ball, the ousted premier said he will visit DG Khan again if the locals promise to make sure that the PTI candidate wins the upcoming by-elections over the weekend of July 17.

He vowed to hit “two wickets with one ball” on July 17.

He told his supporters to go door to door to prepare for the by-elections and not be “scared off by any tactics” by those in power.

He said the ‘imported government’ was trying to initiate proceedings under Article 6 of the Constitution against PTI leaders and break up the only national party of the country.

He thanked the public for coming out in numbers. Commenting on the removal of his government, Imran blamed the Americans and their corrupt facilitators as responsible.

“They conspired to subvert my government and install a coterie of crooks. They overthrew my government because the west wanted puppets in power that will be answerable to them.”

“Slaves can never move forward,” he said, adding that the nation has been begging for money since 75 years. “Is this why Pakistan was made?”

Imran lamented how the ‘imported government’ leaders believe that Pakistan is alive because of America.

Imran said we are a nation of 220 million people and can do anything. “Faith keeps us united with a singular vision and a singular Makkah.”

The former premier went on to tell the charged crowd about how the incumbent government leaders looted the nation and bought properties abroad.

“The money supposed to be spent on infrastructure, hospitals and education was spent on buying properties and luxuries,” Imran said, emphasizing that this Jihad has been continuing since 26 years and will not end till the nation gets rid of all the looters.

Urging the public of Multan to vote PTI in the upcoming by-polls, he said “If we don’t get rid of the corrupt leaders then we will not be able to move forward.”

Imran maintained that no one can ever cause a rift between PTI and the military. Then he played a video showing PML-N VP Maryam Nawaz, former PM Shahid Khaqan Abbasi, Planning Minister Ahsan Iqbal and Interior Minister Rana Sanaullah explaining how a no-confidence motion cannot succeed without the establishment’s help.

“India and Israel was happy when Shehbaz came into power,” he said. “The West also supported.” Imran vowed to fight against the looters till he is alive, asking the people to assist him in this mission.