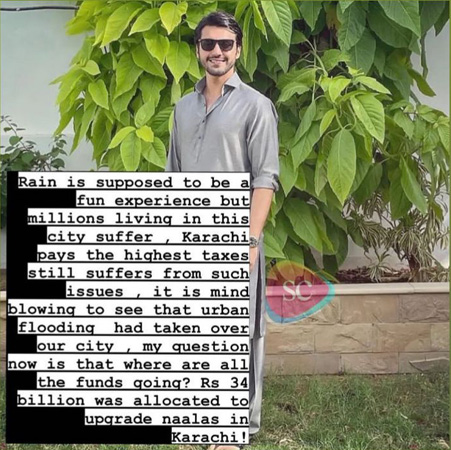 Ahsan Mohsin Ikram has questioned the government of Sindh as he expressed his concern and disappointment over Karachi’s situation after monsoon rains.

Taking to Instagram stories, Ahsan shared a video of a citizen of Karachi stuck in rain water and wrote, “Rain is supposed to be a fun experience but millions living in this city suffer, Karachi pays the highest taxes still suffers from such issues, it is mind blowing to see that urban flooding had taken over city, my question now is that where all the funds going? Rs 34 billion was allocated to upgrade naalas in Karachi!”

Parts of Karachi were drowned after heavy rain lashed the city on first two days of Eid-ul-Azha, ruining the festival for the
residents of the metropolis.

Despite government’s tall claims, machinery to pump water out the streets were nowhere to be seen while citizens continued to face problems in daily commute.

Meanwhile, Chief of Army Staff General Qamar Javed Bajwa on Tuesday reached Karachi directly from Saudi Arabia and flown over the city to oversee impact of urban flooding due to recent heavy spell of rains.