* The exhibit will remain open until September 29 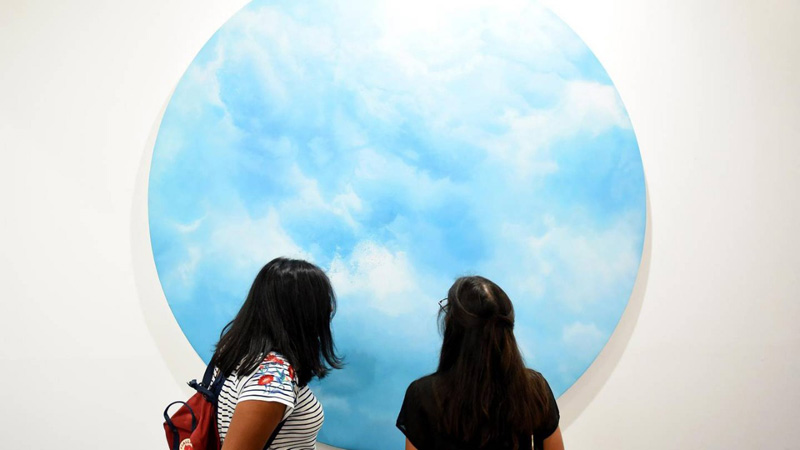 The show encapsulates “works made in the past decade in which the artist’s investigation of the parameters of drawing are brought into focus”, stated Maraya Art Centre.

The exhibit will remain open until September 29. Mahmood showcases a series of visuals, accentuating notions of what was, is and becomes. The images evoke parallels to the rituals and routines that constitute life on a daily basis; that leave no physical residue, impressions or marks. Using different forms of printing techniques on fragile surfaces that are prone to disintegration, Mahmood’s visual language has grown to embody modes of mark making born from videos stills of transient moments, describes Maraya Art Centre.

‘Towards Time’, curated by Cima Azzam at Sharjah’s Maraya Art Centre, suggests a pivotal departure from Mahmood’s established background in traditional printmaking, drawing and painting, gliding into the newer and more technological realms of photo transfers, video and digital prints on unconventional surfaces, adds The National report. Mahmood attended the National College of Arts in Lahore, where she specialised in printmaking. After acquiring her undergraduate degree, she pursued a Master’s program in Fine Art at the University for the Creative Arts, UK, with a focus on painting. She has exhibited in Beirut, Dubai, Karachi, Lahore, Madrid, Sharjah and Philadelphia.

In 2019, she was commissioned by UAE Unlimited to create work for the exhibition ‘Tashweesh’, held at Maraya Art Centre. For the current exhibit, many of these works were created over the past three years and their conception and process can be traced back to a trip Mahmood took to Satwa’s fabric bazaar.

She began experimenting with photo transfers on fabric and, after placing the printed image on fabric by a window, became fascinated with the way the light coming in from behind unexpectedly affected the picture.

Intrigued by the notion of printing “moving” images that shift and change from the impact of their environment, she experimented and tried printing on other surfaces available in her studio and house, such as mylar and ceramic tiles.

Mahmood is also a member of the band ‘Sail into Night,’ so musical elements, specifically, tempo, is embedded in her visual practice, and highlighted in titles of works such as Frequencies and Listen.

The entire work is like a musical time-lapse of a moment of solitude eliciting a similarly contemplative effect such as a large-scale Monet.

Dr Nina Heydemann, Maraya Art Centre’s director, describes much of Mahmood’s work in the show as enacting a kind of “digital Impressionism,” using technological tools and what is readily available – from household surfaces to the desktop printer and a phone camera – to achieve the same soft, poetic blurriness encapsulated by an art movement.

Similarly, impressionist painters were known to spend hours outside in efforts to capture the almost imperceptible shifts of sunlight on their canvases. Mahmood’s work, however, looks more inwards. With a lot of her works created out of and in solitude within her studio during the coronavirus lockdown, the basis of the works comes from stillness and focusing on the details.