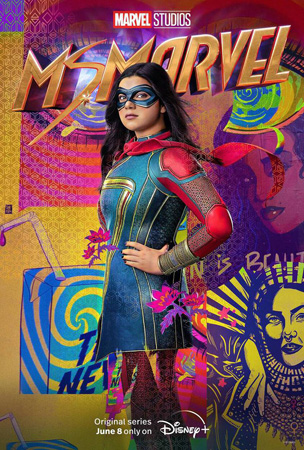 Disney+ show Ms. Marvel will come to an end today with the airing of its sixth and final episode and the cast of the show have special messages prepared for their fans. Taking to Instagram, Marvel Studios shared video clips of all the stars from the show starting from Iman Vellani who plays the superhero Kamala Khan in Ms. Marvel.

“It’s finally the time for season finale and I don’t know how to feel. Weird, yeah, I feel weird. To think that last two years of my life came down to this moment on a random Wednesday in July is like truly very special,” she said.

Vellani added that this episode means a lot to her as a fan and a Pakistani and as a human in general as lots of tears went into making this episode “happy and sad”, and just pure infectious and genuine love.

Mehwish Hayat, who plays Kamala’s great grandmother Aisha in the show, also had a message for everyone. “I cannot begin to thank everybody for the way you have taken Aisha to heart. I absolutely loved playing her and so touched that her story resonated with so many people out there.” She called the finale an “epic” episode that she promises nobody would want to miss.

Marvel also uploaded videos from the rest of the cast, including Rish Shah who plays Kamran, Matt Linz who plays Bruno and Yasmeen Fletcher who plays Nakia.

In episode five, Kamala discovers her true potential as she discovers Red Dagger, Kareem, in Karachi as well as Waleed who guide her. While she is still figuring out her new powers, the Clandestines come after her. The episode also featured Kamala getting transported back to 1947 and the last train that her family were able to catch to Pakistan, but unfortunately only her great grandfather and grandmother Sana were able to get on it.

Now the story unravels as Kamala returns to Jersey city where Kamran had gotten powers from his mother, Najma who sacrifices herself and passes through the Noor gateway in Karachi. The season finale of Ms. Marvel will be available to watch today on Disney+. For viewers in Pakistan, the show is currently being screened exclusively in theatres. The last two episodes, 5 and 6, will premiere this Friday.