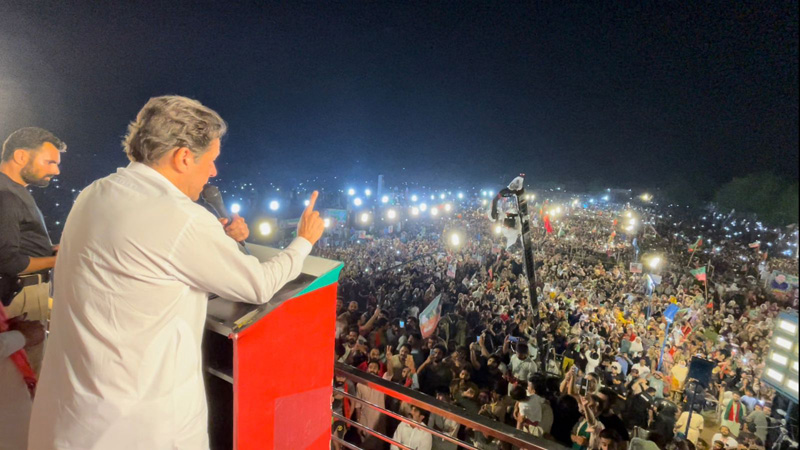 PTI Chairman and former prime minister Imran Khan Wednesday expressed optimism that his party will win the July 17 Punjab by-polls despite the ‘umpires’ full backing to the opponents.

Addressing a public meeting in Jhang, he said, “There is a certain Mr X in Lahore and there is also Mr Y who has been sent by Mr X to Multan. They have orders to make thieves win elections at any cost. However, the entire nation is united.” Imran said he defeated the Indian cricket team in India despite having their own umpires and added, “We will defeat them [rival parties] despite having umpires on their side.” Imran said the PTI was not only competing with the PML-N and other opponents but with the chief election commissioner too.

“The CEC is secretly meeting Maryam and Hamza.” Imran Khan also said he tried to make the electoral system of Pakistan fairer by bringing the Electronic Voting Machines (EVMs) but it was opposed. “Those who have the power. They also manipulate elections. They also did not allow [to install EVMs],” the ex-premier revealed.

“When I was in power, I tried to make a system for a free and fair election. I wanted to bring EVMs. It is used in India and Iran as well. We wanted to bring it here so the rigging allegations would become a thing of the past. But these two families, who have ruled Pakistan for the past 30 years, are staunch opponents of EVMs.

The CEC also opposed and did not let it come here,” he said and added that his party’s focus is now on stopping the rigging on July 17. “I want to ask the CEC, if you have any ethics, you should’ve resigned. Police were used in local bodies elections,” he added, says a news report. The PTI leader said that millions of rupees were spent in Senate elections openly but no one has been caught yet.

“Yousuf Raza Gilani’s son was caught taking money.” The current rulers, he said, were imposed upon the nation through a foreign conspiracy. “This prime minister and his two sons. They had Rs16 billion worth of corruption cases against them. But they were imposed upon this nation via a foreign conspiracy.” He added that the incumbent government amended the NAB law immediately after coming into power to hide their crimes. The PTI chief feared that Pakistan was heading towards a similar situation to that of Sri Lanka due to the dynastic rule of two families – Sharif and Zardari.

“We are going to suffer the same fate as Sri Lanka because [Sri Lankan] rulers were also a family-like here two families are ruling the country for the last 30 years,” he said. Referring to Sharif and Zardari families, Imran said these two families have become billionaires while the country is drowned in debts. “Nawaz Sharif is the biggest dacoit of this country who along with Zardari made the country indebted.”

“This is not Imran’s war. This is not an election but jihad for real freedom.” He went on to say that there were some people who used to think big of Shehbaz Sharif and that he will make a huge difference. However, he added, the result is in front of everyone. “Inflation is touching the roof today,” he further said. Imran said his fight is against the Sharif family, dissident party members, and the Election Commission of Pakistan (ECP) in the upcoming by-polls in Punjab.