July 17 is day of fight with ‘Punjab’s enemy’ 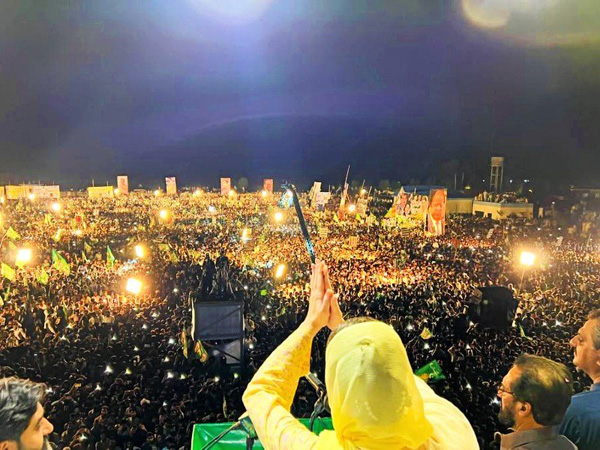 Addressing a jalsa in Punjab’s Layyah, she said people attending the gathering have broken their own record. “The election supposed to take place on July 17 has already been won by you,” she said, adding that PP-282 candidate Tahir Randhawa has already won the upcoming by-election on July 17. Maryam reminded the people that their battle is with the inflation imposed on them by former prime minister Imran Khan. “The lion’s fight is with corruption, incompetence and unemployment,” she said. “July 17 is the main battle with Punjab’s enemy Imran Khan.” The PML-N VP went on to say that her father, deposed prime minister Nawaz Sharif and his brother, the incumbent PM had established CPEC, but Imran formed the Gogi Pinky Economic Corridor (GPEC). “What Jihad does he talk about?,” Maryam questioned. “The one which Farah Gogi and Bushra Bibi collect funds for?”

Maryam Nawaz said that Prime Minister Shehbaz Sharif will announce a reduction in petroleum products within 24 to 48 hours.

“We made some difficult decisions but now good times are coming. In the next 24 to 48 hours, petrol and diesel prices will be reduced,” she said while addressing a public gathering in Layyah. Maryam said that Hamza Shehbaz had also made an announcement, giving relief to the people of Punjab by providing free electricity for up to 100 units. However, she added, former prime minister Imran Khan approached the court to stop the relief. “If not today but after July 17, people of Punjab will avail this relief,” she added. The PML-N stalwart said that Imran Khan never reduced petrol and diesel prices during his entire four-year tenure except for one time when he knew his rule was going to be over soon. Calling Imran Khan “the biggest plan for the destruction of Punjab”, she said that his wife Bushra Bibi and her friend Farah Khan acted like a “front man” to him. “He [Imran Khan] was the mastermind but Pinky and Gogi were funding his so-called jihad.” She said that in KP, where the PTI has been ruling for the last nine years, people are helpless after rains. “After destroying K-P, Imran wants to destroy Punjab,” she added. Maryam said that the PTI chief used to claim to build 5 million houses in Pakistan but did not even construct a single one, adding that he claimed to eradicate corruption but instead gave us Gogi and Pinky.