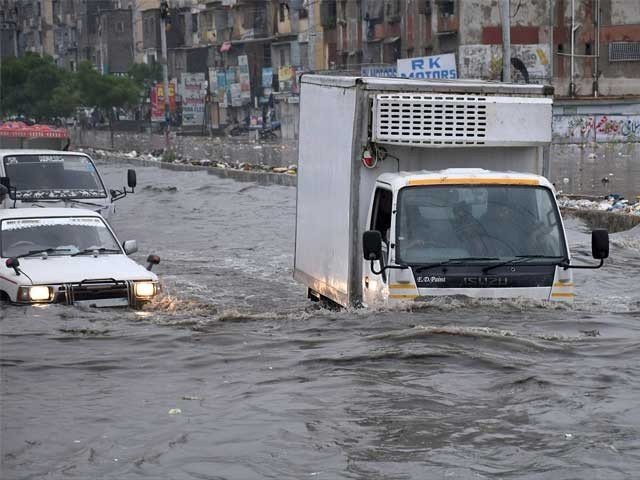 KARACHI: Sindh Chief Minister Syed Murad Ali Shah on Wednesday said that the city received a record rain of 342.4 mm between July 10 to 11 upto 2 pm, however the rainwater was disposed of soon after the rain. He said this while addressing a press conference at CM House. Provincial ministers, Sharjeel Inam Memon, Imtiaz Shaikh, Syed Nasir Shah and Advisor to CM Rasool Bux Chandio were present on the occasion.

Syed Murad Ali Shah said that the city received 342.4 mm rain, including 106 mm on July 11 and 126 mm upto 2pm on July 12. “This was a record rainfall in the history of the city but now the infrastructure of the city in terms of disposal of the water was built, therefore the rainwater was disposed of within 24 hours and our teams comprising provincial ministers, advisors and government officers suctioned the water out from the depressions, low-lying areas and from the underpasses with the help of machinery and pumps.

The CM said that people slaughter sacrificial animals on the roads. “The district central has the largest number of slaughters in the country,” he said and added the solid waste management had started lifting the offal when the rain started, therefore the lifting [the offal] work was stopped, and the backlog emerged, which had been cleared.

The CM said that KWSB had a fleet of 36 Suction and Jetting Machines upto the year 2010. “Frequent sewage overflows are encountered across Karachi due to overloading of the sewerage system,” he said and added that the addition of 20 new Suction & Jetting Machines has improved KWSB’s capacity to clean and de-silting the affected sewerage system of Karachi.

He said that another lot of 56 Suction & Jetting Machines were being added to existing fleet under the World Bank funded KWSSIP Project and in this way the total number of machines would increase to 112 within next six months.

To a question, the chief minister said that the storm-water system was not designed for such a huge rainfall. “The cities London has such a huge storm water drain because it receives the rain, light and heavy, almost the whole year,” he said and added we, in Karachi receive such heavy downpour once in five to eight years, therefore we could not afford to invest billions of rupees on its expansion by digging the entire city.

According to the CM Sindh these heavy rains were the results of climate change, and his government was working on different projects to mitigate its effects. The CM Sindh said that various areas such as Saadi Town and other areas have been constructed on the natural waterways which have blocked the natural flow of rainwater in gravity.

The CM Sindh said that when he had visited different nullas and pumping stations he discovered that the plastic shopping bags had choked them. “We would have to address this issue seriously,” he said.

Syed Murad Ali Shah said that Nooriabad Power plant was supplying 100 MW uninterrupted electricity to Karachi but even then, a reference was filed against him which he and his team were facing.

Replying to a question, the chief minister said that his government has made necessary arrangements to face the upcoming new rain spell starting from tomorrow. “We are also working to launch some rainwater disposal projects keeping in view the issues we face these days,” he said.

The chief minister complaining with the media said that they were only showing Karachi, particularly the low-lying areas where water had accumulated but the rains have submerged the cities of other provinces, but they did not bother to show them on their screens. “I welcome your genuine criticism, but exaggeration has also been made,” he deplored.