Imran’s allegation of rigging in by-election, a confession of defeat: Marriyum 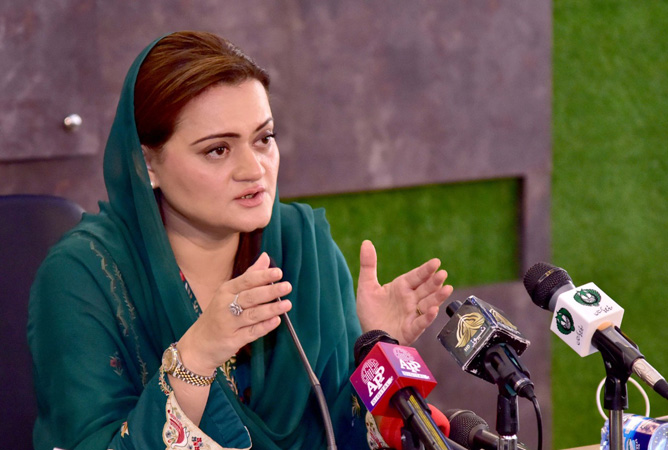 ISLAMABAD: Minister for Information and Broadcasting Marriyum Aurangzeb said on Wednesday that PTI leadership’s allegations of rigging were in fact a confession of Imran Khan’s defeat in upcoming by-elections.

In a statement, she said as prime minister, Imran Khan continued to flout the laws, orders and rules of the Election Commission of Pakistan.

Imran Khan and his ministers not only openly violated ECP rules while in power but also threatened it, she said.

The minister said that when PTI was in power it threatened the ECP and even today those who stole the 2018 elections were threatening the ECP.

She said on the one hand the PML-N, which bowed to the law, election rules and orders of the ECP and PML-N ministers resigned from their posts to abide by the ECP rules.

She said on the other side was Imran Khan and his party which was threatening and abusing the ECP even today.

The minister said that Imran was not ready to bow before the law and rules in an attempt to become “blue-eyed boy” as he considered himself as law, he did not consider himself subject to the law.

Imran was also abusing and threatening the Election Commission on a daily basis and filing petitions.

She said Imran Khan had stolen the elections and he could not act to protect the sanctity of the vote.

The minister said that bye-elections were yet to be held but Imran’s mourning had already begun.

“The ECP is actually the target of Imran Khan because of the foreign funding case”, she said adding Imran and his ministers continued to campaign in the bye-elections during their tenure in power.

On the contrary, when Prime Minister Shehbaz Sharif was given directives by the ECP, he canceled his visit.

Imran Khan had campaigned in Gilgit-Baltistan, Khyber Pakhtunkhwa and Azad Kashmir elections in violation of clear orders of the ECP.

She said Imran’s ministers were caught red-handed distributing money in election campaigns and announcing development schemes and rigging the elections.