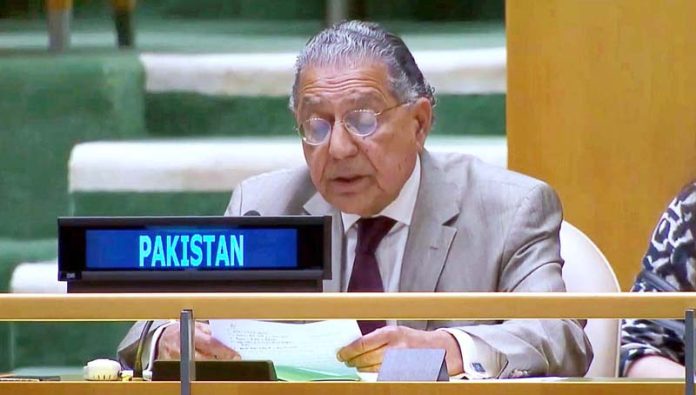 NEW YORK: Pakistan’s Permanent Representative to the United Nations, Ambassador Munir Akram, said on Wednesday that resolving the lingering Kashmir dispute was critical, citing the massive suffering endured by Kashmiris as well as the threat to regional and international peace and security.

Munir Akram said in a statement commemorating Kashmir Martyrs’ Day that India’s occupation forces had martyred over 100,000 Kashmiris since the start of their struggle in 1985 to secure the legitimate right to self-determination promised to them by Security Council resolutions.

“This Day is commemorated each year by Kashmiri people and people of Pakistan all over the world to honour the 22 Kashmiris who were martyred by the Maharaja’s Dogra Forces within the premises of Srinagar Central Jail on July 13,” he said.

Ninety-one years on, he said, the brutal oppression of the Kashmiri people continued to this day. Munir Akram said that India had further intensified its campaign of oppression since its unilateral and illegal actions on 5 August 2019.

He mentioned that hundreds of Kashmiris had been killed in fake encounters, thousands of Kashmiri youth detained and many disappeared or extra-judicially killed in custody. He pointed out that Kashmiri leaders remain incarcerated while fundamental human rights including the rights to assembly and free expression were also curbed.

“Kashmir has been turned into the largest open air prison,” he said.

He reaffirmed the full solidarity of the government of Pakistan with the people of Jammu and Kashmir in their just struggle for freedom through the realization of their inalienable right to self-determination in accordance with the UN Charter and Security Council resolutions.

“The day is not far when the brutal Indian occupation will end and the sacrifices of the martyrs will usher in the dawn of freedom for Kashmiri people,” he said.