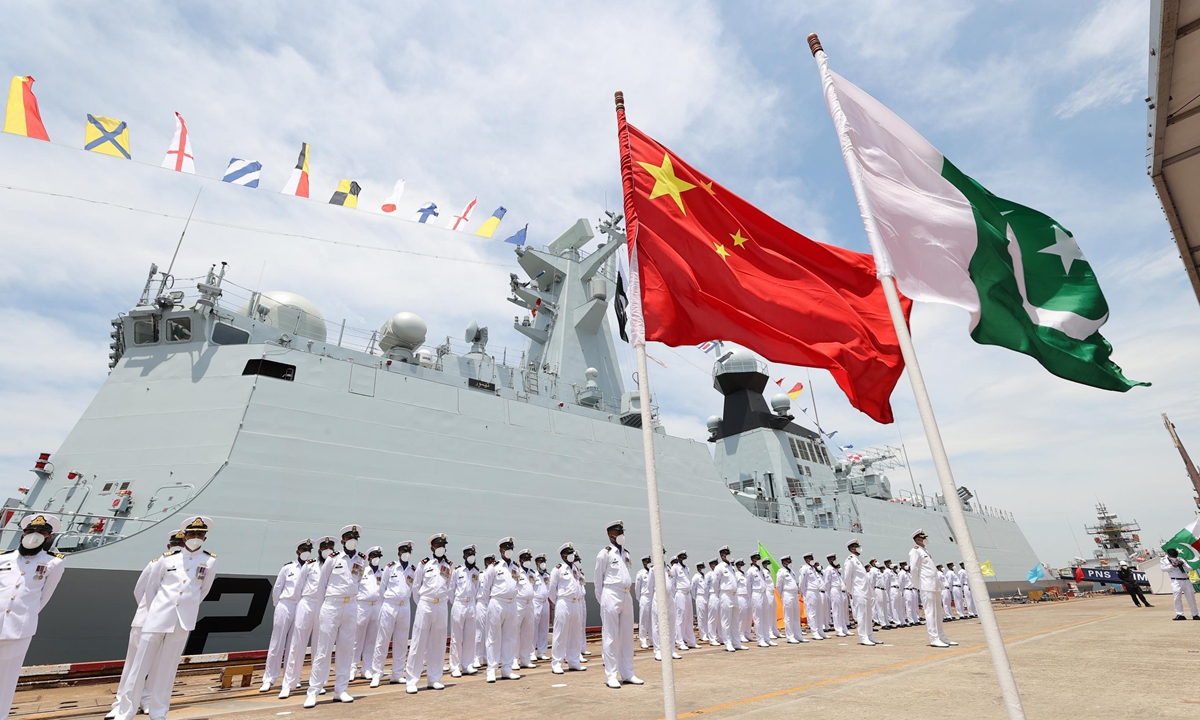 BEIJING: The ongoing China-Pakistan joint naval drill off Shanghai entered a live-fire phase after wrapping up the exchange phase on shore, with analysts saying that the Pakistan Navy’s China-built Type 054A/P frigate is expected to gain valuable experience from the Chinese People’s Liberation Army (PLA) Navy’s vessel of the same type.

The Type 903 comprehensive supply ship Qiandaohu, an early warning aircraft, two fighter jets and a helicopter from the PLA Navy will also join the drills in the process.

The live-fire phase came after the two navies wrapped up the two-day exchange phase on shore on Monday, which featured simulations of tactics and command as well as professional exchanges between sailors from the Xiangtanand the Taimur over techniques in the use of the main gun and the close-in weapon system, the support of vessel-based helicopters, anti-submarine warfare, damage control and maritime replenishment, the PLA Navy said.

Both the Xiangtan and the Taimur are of the Type 054A-classs frigate, observers said. Pakistan is the first user of the China-built Type 054Aoutside of China, with the Taimur, the second of four Type 054A/P frigates, being delivered to the Pakistan Navy in Shanghai on June 23, and the first ship of its class, the Tughril, having joined the Pakistan Navy Fleet in January.

Exchanges between Chinese and Pakistani sailors will enable the latter, who just received delivery of the Taimur, to quickly accumulate knowledge in making the best out of the vessel, and putting them into practice in the live-fire exercises, a Chinese military expert who requested anonymity told the Global Times.

By teaming up with Chinese vessels and aircraft, the Pakistani warship will get the chance to integrate into the PLA’s combat system and receive real-time battlefield information. This experience will help Pakistan build its own comprehensive combat system, the expert said, citing a report by the PLA Daily, which said the PLA Navy’s early warning aircraft is scheduled to provide situational intelligence and targeting data to the Pakistani vessel in the missile attack drill.

While sharing the same general design, the Pakistan Navy’s Type 054A/P is better equipped than its counterpart in the PLA Navy in some aspects, Shanghai-based news website eastday.com reported. The Type 054A/P’s radar system reportedly has longer detection range with additional anti-stealth capability, while its anti-ship missiles have faster speed and longer range.

This is because the Pakistan Navy uses the Type 054A/P as its main surface combatant that must be responsible for all anti-air, anti-ship and anti-submarine missions, while the PLA Navy uses the Type 054A as a support ship for only anti-submarine and additional anti-air missions, eastday.com said, as the PLA Navy has larger vessels like the Type 055 and Type 052D destroyers as main surface combatants.

It reflects that China’s arms industry can customize its weapons and equipment for foreign customers to suit their demands, analysts said.