* PTI chief says July 17 is a test for 'powerful quarters' to hold free and fair polls
* Asks CEC to tell how many times did he visit Shehbaz, Hamza 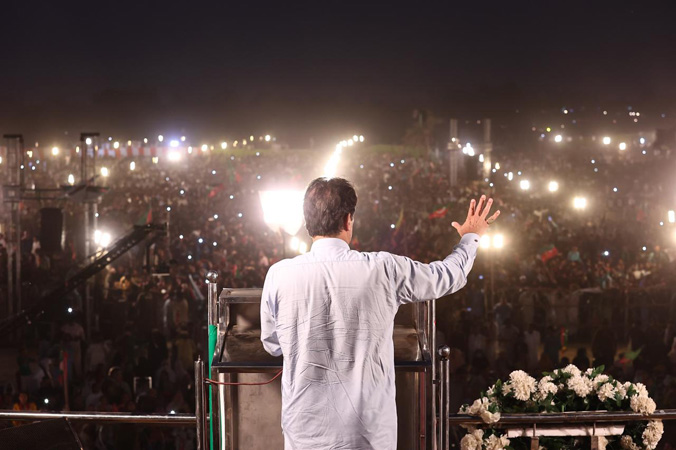 PTI Chairman and former prime minister Imran Khan Tuesday said ‘Mr X’ had deputed ‘Mr Y’ in Multan to rig the upcoming by-polls but the people would thwart all such efforts, a private TV channel reported.

Addressing a mammoth public rally in Darya Khan Tehsil of Bhakkar in connection with the electioneering for by-polls, Imran said lotas (turncoats) were directionless and their heads tilted where there was money and power. “When a person doesn’t have a Qibla, he becomes a turncoat,” he said and grumbled that whoever was elected from Bhakkar turned out to be a turncoat.

He reiterated that ‘crooks’ had been imposed on the country after a US-backed conspiracy and local abettors. He said the by-polls were not an election, but their struggle had shaped un in a ‘jihad’ and asked the women to go from door to door to spread this message. Imran said those speaking against the imported government were being threatened through different tactics to demoralize them as he vowed to never accept the ‘cabal of crooks’ irrespective of how many FIRs are lodged against him or other pressure tactics are used.

Calling out the ‘local abettors’ and those who brought them to power, he said, “I will not accept the thieves even if I have to sacrifice my life.” “The thieves in power have robbed the country of Rs11 billion and have had themselves pardoned,” the party chairman claimed.

He added that Prime Minister Shehbaz Sharif-led government had destroyed the economy amidst rising inflation within the country. A day earlier, Imran expressed fear that Pakistan is heading towards a similar situation to that of Sri Lanka due to the dynastic rule of two families – Sharif and Zardari. “We are going to suffer the same fate as Sri Lanka because [Sri Lankan] rulers were also a family just like the two families here [in Pakistan] who are ruling the country for the last 30 years,” he said.

He also asked the Chief Election Commissioner (CEC) Sikandar Raja to tell how many times he visited PML-N’s Hamza Shehbaz and Maryam Nawaz.

During the rally, he also played different clips of contradicting statements by the PML-N leaders. Referring to the intense monsoon spell that inundated Sindh’s capital city and stagnated infrastructure, Imran in a separate social media post on Twitter accused the Bhutto-Zardari family of corruption. “Rains have once again exposed 14 years [of] corrupt rule,” wrote the ousted premier, adding that the devastation of the city was a “classic example of how corruption ruins governance.”

The PTI leader also accused the political dynasty of taking federal funds provided to Karachi, directing them to “fake accounts” and investing in Dubai’s real estate. “This nexus of evil must be brought to an end,” Imran remarked. Imran Khan made it clear that they would not accept US slavery at all costs. Criticising the collation government, he said a “US slave” has been made the prime minister of Pakistan.

He maintained that Shehbaz Sharif was a “thief” and his son Hamza Shehbaz was an unconstitutional chief minister. He also lashed out at the PPP and its co-chairman Asif Ali Zardari. He alleged Zardari and his aides were sending Sindh’s money abroad. Without naming PML-N’s Maryam Nawaz, Imran Khan said that a “liar queen” was leading the campaign of thieves. Dubbing Suleman Shehbaz a “kickback specialist”, Imran Khan said that the Panama Papers revealed that Maryam Nawaz had Rs4 billion properties in London’s posh area. The PTI leader said they concealed the stolen money abroad to escape the accountability process. He urged the masses to inflict a defeat on the thieves to change their own fate on July 17.

Addressing a rally in Layya, Imran urged the country’s ‘powerful quarters’ to hold free and fair elections, saying their ‘first test’ will be July 17. “Today, I am giving a message to all of Pakistan and to those who hold power in this country. If you won’t let free and fair elections be held then I have no doubt that the country will be moving towards ’embarrassment,” he said in an apparent message to the establishment.

“Whoever is worried about the country today, all of them are saying the same thing that you hold free and fair elections and your first test will be on July 17. The entire nation will be watching,” he added. “All these people are peaceful despite where the country stands today,” said Imran while pointing towards the participants of the rally. “These people do not want to hurt their country. They are out because they want a better future. I have a message for all. There is only one way to stop the country from going down and that is free and fair elections,” he added. Imran also said when Pakistani rulers decided to participate in the war on terror, it was not for the betterment of Pakistanis rather it was done to please the US.

“As a result, 80,000 Pakistan got martyred and 3.5 million from tribal areas had to move elsewhere in the country. But despite our efforts, the US attacked Pakistan with 400 drone missiles. When tribal area people lost their women and children, they took revenge against Pakistan. No one asked what we had to do with the US war. It was only because our rulers were fearful of the US,” he said. “You all know what my answer was. It was what my ideology is. We are an independent country. It is not in our interest to participate in their war.” The former premier said Asif Ali Zardari and Nawaz Sharif had their money in a foreign country so they could never condemn 400 drone attacks in Pakistan which occurred during their tenure. “I went to Russia because I knew there was global inflation. Oil prices were high and we needed wheat and gas. We talked about purchasing wheat and gas. Our petroleum minister asked them that we wanted to purchase petrol at a 30 percent cheaper rate.” Imran claimed that the US did not like his visit to Russia and conspired against his government and used its ‘slaves’ to overthrow the regime.