PTI to be thrown out of politics on 17th: Maryam

* PML-N VP says their rival is 'incompetence and inflation', not PTI
* Imran Khan a 'thief and liar' who can't tolerate a progressing Punjab 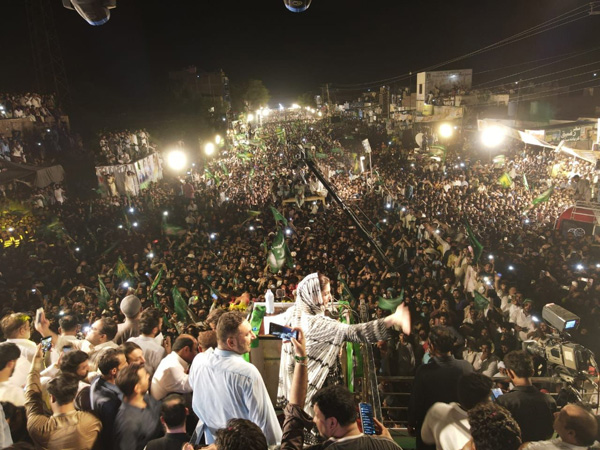 PML-N Vice-President Maryam Nawaz Tuesday said their rival was not the PTI but ‘incompetence and inflation’.

Addressing a rally at Gojra Mor in Jhang as part of the party’s campaign for the by-polls, Maryam said the PML-N had constituted a government in the Punjab adding that the hard times were over and good times were on the horizon. “If people want inflation to decrease, then they should vote for the PML-N. PML-N’s competition is not with Imran Khan but with inflation and incompetence,” Maryam said.

She asked the people to commit that they will throw out the people against Punjab’s development. The PML-N leader also assured the people that she will not rest until they got all facilities of life.

Later, addressing another public gathering at Chiniot Mor, Maryam urged the public to not stay in their homes on July 17. “Make the lion win in Jhang and I promise you that we will shower development projects here,” Maryam said, adding that Imran Khan needed to be thrown out of Punjab.

She lamented how the former PM couldn’t tolerate the progress of Punjab. “When the lion wins from Jhang on July 17, I will come back again to thank you all.”

The PML-N VP highlighted how Imran only benefitted Farah Gogi and Bushra Bibi. “Imran is a thief and a liar as well.”

Maryam Nawaz said that Prime Minister Shehbaz Sharif will lower petrol and diesel prices within two days. Addressing a rally in Jhang’s Athara Hazari on Tuesday night, she said PM Shehbaz told her to pass on his message to the people earlier. “Tell the public of Jhang that I feel their pain and I will take it away.”

Maryam added that the government’s fight was not against former prime minister Imran Khan but animosity against Punjab.

In another brief address to a public rally earlier in Jhang’s PP-127 constituency after heavy rain, she urged the people to vote for PML-N if they want to see prosperity and development in the province. Maryam told the public that good news will be heard from everyday onwards now. “The lion should roar from every place in Jhang.”