Story of the last bullet — the mission ‘Anthropoid’ 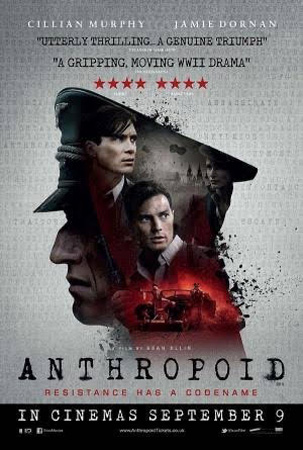 The movie was, however, released on September 9, 2016, from the United Kingdoms. In the movie, two Czech soldiers entered their own homeland, coming from London to fight for their land under the siege of the German Nazis. They parachuted into their occupied land to kill the Nazi officer, who was historically the first Nazi officer killed during his reign as the officer, Reinhard Heydrich.

The movie begins with the two soldiers who escaped death in a forest while they were newly entering their occupied land. Their very first experienced was unworthy as they were given asylum by a person who was a traitor: he took him in his house in the forest and asked them to rest while his partner was giving them something to eat. The Czech soldiers felt the trouble and found him at the other room making a call to the Nazis to arrest them. They killed one of them while the next escaped successfully.

From this part, we grasp that when you belong to a movement or part of a war against a power as Nazi, you are never secure. The biggest example I can mention here is of the great revolutionary leader, Dr. Che Guevara whose information was leaked by a local shepherd only because he had problem with the exchange of firing between Che and the opposite army – which was although for the liberation of the same people where the shepherd himself belonged to.

The movie, on the other hand, portrays the significance of secrecy in such missions as Anthropoid. When they reached their occupied land, they were, howbeit, lately received by their partners in the town. But, they even did not know what they had come for. It was their secret meeting where they unveiled the “Mission Anthropoid” which was a surprise for them as well. When they asked what the mission was other than what they were thinking that to be, the two soldiers narrated they were there to kill the Nazi officer, Heydrich. They were left in a wholesome shock. Although they tried their best to convince the two soldiers that it was going to leave severe consequences and killing a Nazi’s superior officer was not a cup of tea, but they had no other option. “That’s the only option we are here for,” they said.

The movie was made interesting with the presence of two ladies, Charlotte as Marie and Geislerova as Lenka, who supported the two soldiers without even knowing what their actual plan was. Both the ladies hated the German Nazis but when, after some days of their involvement in the mission, found out that they were there to kill Heydrich, their reaction was harsher than the others. They too were afraid of the outcomes of the attack – most likely because of the fear the Nazis had injected among the people towards the higher ranking officers in particular. But they had no other options thereafter.

The main part of the movie was when they got the news that Heydrich was transferred to Paris who would never return back from there. He was to leave after two days which meant that they had to work on their mission very sooner than they had planned. After several debates, they agreed to execute their plan the other day. They did so. But because of a last minute failure from one man among the supporters of the soldiers, the gun could not fire which the supporter himself did not repaired saying that he had doubts that they would fear executing the plan. However, he fired with his gun and injured the officer who later died in hospital. But the consequences were as they had already comprehended. The civilians were arrested randomly, beaten and dragged to prisons. They had arrested around thirty thousand Czech citizens and announced to kill them all if the assassins had not surrendered within five days.

For any clolonising nation, the colonised citizens are meant for nothing. No matter who went against the coloniser or chose to become rebels, all they can approach and beat or kill are the civilians. Similarly, Nazis killed several citizens and arrested many. Then, one among the supporters of the Czech soldiers surrendered and told the Nazis which family gave them asylum; they raided the house of the family and found out that the soldiers were hidden in a church in the town. They could not guess the rebels could take refuge in a church because they were Jews.

From here began the actual theme of the movie. A six hours long fighting between the Nazis and Czech soldiers. They fought and fought and fought while kept one bullet for them so that when they understood that they could no longer fight, then they could kill themselves. And the same happened. After making the entire Nazis cry for six continuous hours, they killed themselves with the last bullet. They made the history. They made their fellows proud. They showed how one could do anything when it came to the national survival. The two-hour movie is based on actual events. It captures the memories of the Czech soldiers who chose death over their national slavery. It deserves a watch.

The writer is a journalist based in Quetta. He tweets at @Alijanmaqsood12