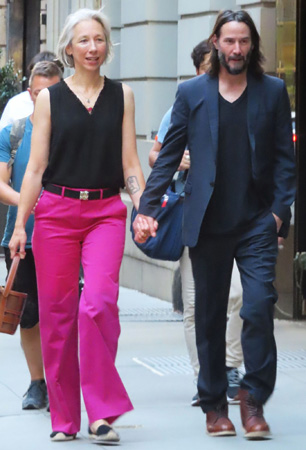 Keanu Reeves and girlfriend Alexandra Grant are on an excellent adventure.

The Bill & Ted star, 57, and his girlfriend, 49, enjoyed a low-key date night as they held hands and went for a stroll down Fifth Avenue in New York City. The long-time lovebirds later stopped at the Quality Meats steakhouse for a meal together.

In photos from the couple’s summertime soiree, Keanu was photographed wearing a simple black V-neck T-shirt, black blazer and trousers. For her look, Alexandra sported a fun pop of color as she mixed a black tank top with hot pink pants. She completed her ensemble with a gold accented belt and necklace.

Keanu and Alexandra’s latest outing comes just over a month after the pair attended the 2022 MOCA Gala together in Los Angeles on June 4. At the event, the couple, who made their romance red carpet official back in 2019, looked more in love than ever as they laughed and smiled at each other on the red carpet.

The actor and visual artist, who have collaborated on two books together, first met at a dinner party in 2009, per New York Times T Magazine.

The couple then dated privately for multiple years before deciding to take their romance public in 2019.

Alexandra’s pal Jennifer Tilly told Page Six in 2020, “I remember a couple years ago, about a year and a half ago, said, ‘Keanu Reeves is my boyfriend’ and I’m like, ‘Wait. What?'” That’s partially because Keanu prefers to keep his dating life separate from his career.

As he told Parade in 2019,”I came to Hollywood to be in movies. I feel really grateful that I’ve had that opportunity, but I’m just a private person, and it’s nice that can still exist.”