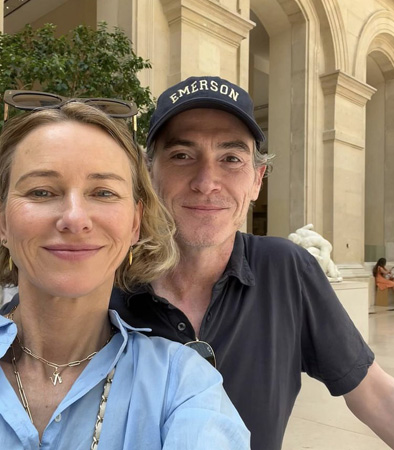 Naomi Watts and Billy Crudup have taken their love to Paris. The Oscar-nominated actress posted a rare photo of the pair on Instagram to celebrate Billy’s 54th birthday on July 8. Naomi, 53, shared a selfie of the two outside the Louvre Museum.

“Happy Birthday my love,” the Loudest Voice actress captioned the post, adding a kissing lips emoji. In the comments section, the couple received well-wishes from several fellow celebs, including Chelsea Handler, Julianne Moore, Naomi Campbell and Rose Byrne. Naomi also shared more photos from their trip to the French capital on her Instagram Stories, including a lunch pic taken at a restaurant across the street from the museum, an image of the Crazy Horse Paris saloon—where they watched a cabaret show, and a shot of the Eiffel Tower with glittering lights. “Midnight,” she wrote. “We are pumpkins.” While Naomi and Billy’s relationship was made public in 2017, they didn’t make their red carpet debut as a couple until the 2022 SAG Awards in Los Angeles this past February. The Impossible actress and Morning Show star, who have known each other for a long time, starred in the short-lived Netflix series Gypsy together.

Naomi was previously in a relationship with Ray Donovan star Liev Schreiber. The actors, who share kids Sasha, 14, and Kai, 13, announced their split in 2016 after 11 years together. The exes have continued to co-parent amicably. In June, Naomi posted a family photo to Instagram, which included Billy and Liev, 54, and his partner Taylor Neisen, 30, at Kai’s middle school graduation. “Congratulations to Kai,” she wrote. “Class of 2022 #modernfamily #graduation.”