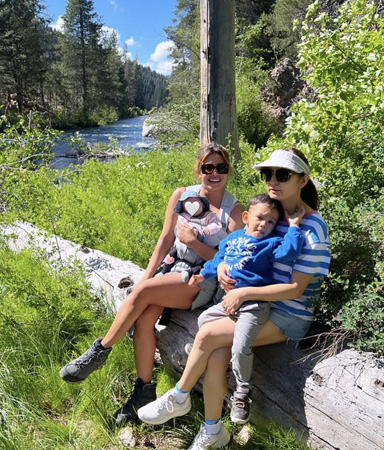 It’s never too early to become a fashion icon in the making. Priyanka Chopra and Nick Jonas’ daughter Malti is only six months old, but she’s already rocking one of the biggest fashion trends. The mini fashionista wore an adorable denim bucket hat in a new picture shared by her mom on Instagram. In the Baywatch star’s July 7 post, which was dedicated to her longtime friend Tamanna Dutt, she wrote: “22 years and counting.. and now with our babies..love you.”

Malti—whose face is covered with a white heart emoji—also appears to be wearing a light pink jacket in the pic, which showed Priyanka keeping her little one close in a gray baby carrier.

Priyanka’s baby girl also seems to already love the outdoors. On the actress’ Instagram Story, she reposted a video of her trip to Lake Tahoe with Nick and their close friends, along with Malti, who appeared to be safely wrapped and hidden away in a blanket.

The 39-year-old and the Jonas Brothers musician welcomed their first child together via surrogate in January. Four months after her birth, the couple shared that Malti had to spend 100 plus days in the NICU before she was finally able to go home.

“Every family’s journey is unique and requires a certain level of faith,” Nick and Priyanka wrote in a joint May Instagram post. “And while ours was a challenging few months, what becomes abundantly clear, in retrospect, is how precious and perfect every moment is.”

Ahead of his first Father’s Day as a dad, Nick got candid about how he’s approaching parenthood, and the advice he’s taken from his own father. “The main thing my father told us is be kind to the people on the way up because on the rocky moments on the way down, they’ll be there for you,” he told E! News in May. “We tried to live that way and walk in humility and just know that there’s tons of people in the world who are very talented who have not been given some of the shots that we’ve been given.” He added, “We try to take advantage of that to really show how appreciative we are.”