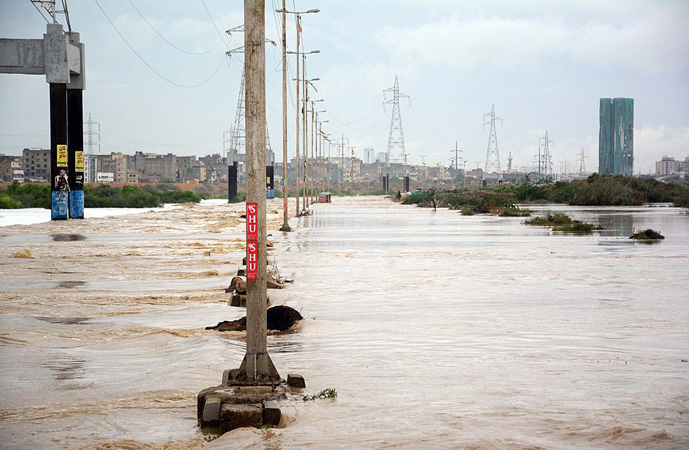 The ongoing monsoon season continued to wreak havoc in major cities across the country, especially in Sindh and Balochistan, as people suffered from prolonged power outages while commuters remained stuck in hours-long traffic jams.

Karachi and other areas of Sindh witnessed heavy rainfall coupled with strong winds and thunderstorms on Saturday increasing fears of urban flooding as the monsoon system across the country has intensified.

Urban flooding was also reported in several localities. In Lyari, streets were inundated with rainwater coming up to the waist stranding people inside their houses. In northern parts of the city, water entered houses creating immense difficulties for residents. Karachi Administrator Murtaza Wahab tweeted that the “major thrust” of the rain was in city’s District South. He also said teams were on the roads “to handle the situation”. 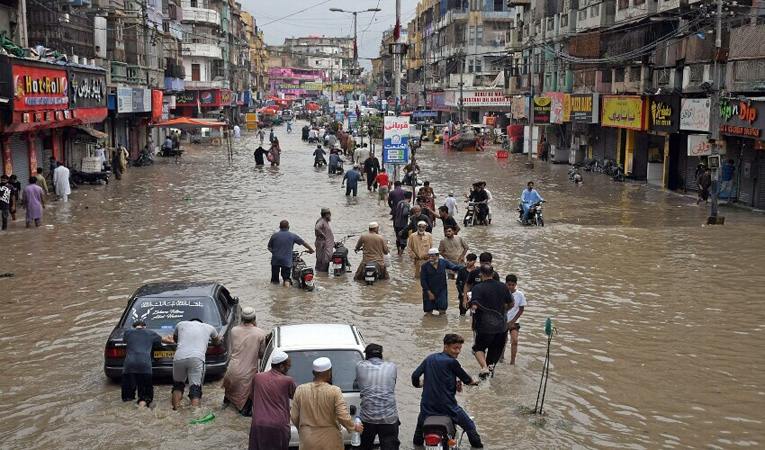 Meanwhile, in a tweet on Saturday, Minister for Climate Change Sherry Rehman said that Sindh and Balochistan were going through very high levels of rainfall on a 30-year average. The appalling condition of the city’s multiple roads following torrential rains forced calling in of Pakistan Army for draining out accumulated water. Pakistan Army personnel reached the affected areas, mostly in Southern part of the metropolis.

The army personnel were also present in various parts of DHA to drain out water accumulated on roads to ensure smooth flow of traffic. Karachi’s Inter-Services Public Relations official said that teams of Pakistan Army’s Engineering Corp were dispatched to rain affected areas. He said some teams had already reached at their assigned destinations and started working while some were on their way. He added that details of rescue operation will be shared with media upon completion of work.

In Balochistan, the Provincial Disaster Management Authority (PDMA) revealed on Saturday that monsoon rains in Balochistan, which started on June 1, have so far killed 57 people in the province and injured 48. Heavy rains have damaged 670 houses in the province while 436 livestock have also been affected by the rains. The most-affected areas include Quetta district, Lasbela, Sibi, Harnai, Dakki, Kohlu, Barkhan, Zhob and Dera Bugti.

According to PDMA officials, rains affected 12 dams across the province, of which three burst due to flooding. In Loralai, six people were swept away by the dam water after which a rescue operation was initiated. Separately, the floods in Pishin and Turbat have entered populated areas, but fortunately, no casualties have been reported so far.

Meanwhile, multiple areas of Quetta have been without electricity for the past four days due to heavy rains. The residents complained that despite several calls, the authorities have failed to restore power.

Earlier in the day, Balochistan Chief Minister Mir Abdul Quddus Bizenjo directed the PDMA, district administrations and other concerned agencies to stay alert as the PMD have forecast more rain in the upcoming days. All the agencies should be ready to deal with any kind of situation while remaining diligent and active, he directed, instructing departments to assure the availability of resources for the protection of life and property of residents. The chief minister ordered the relocation of people living in low-lying areas to safer places and also requested locals to cooperate with the authorities on the occasion of monsoon and Eidul Azha.

Meanwhile, the Met Office has forecast more rains during Eidul Azha, which will be celebrated across Pakistan today (Sunday), and alerted authorities to exercise caution. It said that the monsoon rains entering the country will intensify over the weekend (July 9 and 10). Under the influence, heavy rains with thunder and wind storm have been forecast in Islamabad, Kashmir, Swat, Mansehra, Kohat, Mianwali, Sargodha, Abbottabad, Haripur, Peshawar, Nowshera, Kurram, Jacobabad, Jhelum, Sialkot, Lahore, Murree, Rawalpindi, Attock, Okara, Sahiwal, Jhang, Chakwal, Hafizabad, Mandi Bahauddin, Kohistan, Galiyat and Mardan. The showers will last from July 9 to 12.