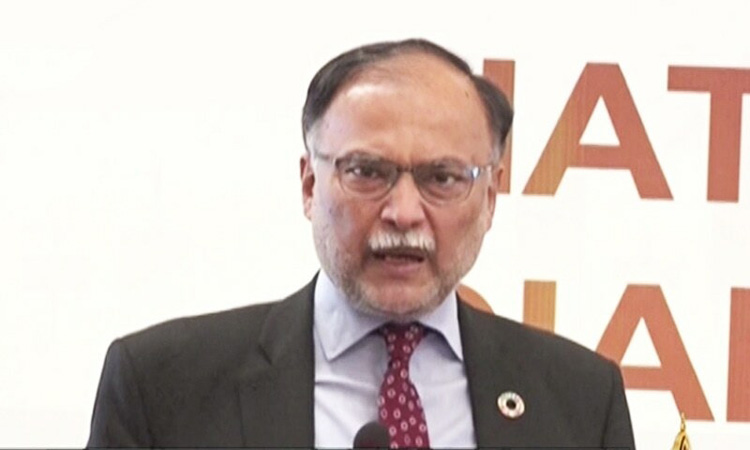 Minister for Planning and Development Ahsan Iqbal on Saturday said that he will not seek criminal charges against PTI supporters who heckled him at a restaurant in Bhera qa day earlier. Addressing a press conference, he said the incident happened to him was a reflection of the training of PTI supporters imparted by Imran Niazi. “I am directly victim to hate when a youth had opened fire at me few years ago and the bullet is still in my body,” he said. “I always think to eradicate hate from the society as the seed of hate can not be easily weeded out from the society,” he said and added intolerance and hate should be countered right now, otherwise, it would create anarchy. Ahsan Iqbal said that Imran was a player and the nation had expectations of sportsmanship from him, but, unfortunately, Imran’s politics based on promoting hate and extremism. If Imran was sincere to his followers, he should not train them for hate or extremism, the minister added. “I am not new in politics as I have given three decades to it and people of Narowal elected me five times with a majority,” he said and thanked people in and outside the country who supported him after the incident. The minister said people from all walks of life had condemned the incident. The minister said: “I have a right to take legal action against the family but I am not going for any legal action.” He added that by following the teachings of the Holy Prophet (PBUH), he would not take any legal action against the family. He appealed Pakistan Tehreek e Insaf (PTI) workers to recognise the real face of their leader (Imran) who was using their innocent minds, adding they should also observe whether Imran was sincere to them or not. “Track record of Niazi shows that he used people,” he said and added Imran started using people from Majid Khan, his cousin, who had introduced him in cricket and later on, Niazi ousted his cousin. Nawaz Sharif allotted a plot for the Shaukat Khanum Hospital and Shehbaz Sharif gave approval of the University in Mianwali, Ahsan Iqbal said. The nation knew his services for the country and voters of his constituency (Narowal) had always supported and expressed their confidence over his services, he said and added: “Imran could not prove corruption of a single penny against him in projects during his four years of power. Ahsan Iqbal said that it was his faith that after politics of allegations and lies against his opponents, Imran Niazi would never come to power. He appealed the PTI workers to get true information before blaming others and urged them to shun the path of hate and intolerance. To a question, the minister said Imran’s government badly damaged the national economy, adding that the PML-N had to take difficult decisions to put the country on the way to progress and prosperity. He said several things had been improved and economy was now out of danger. He hoped that soon the country would be out of crisis.