‘No differences’ within PML-Q, insists Shujaat 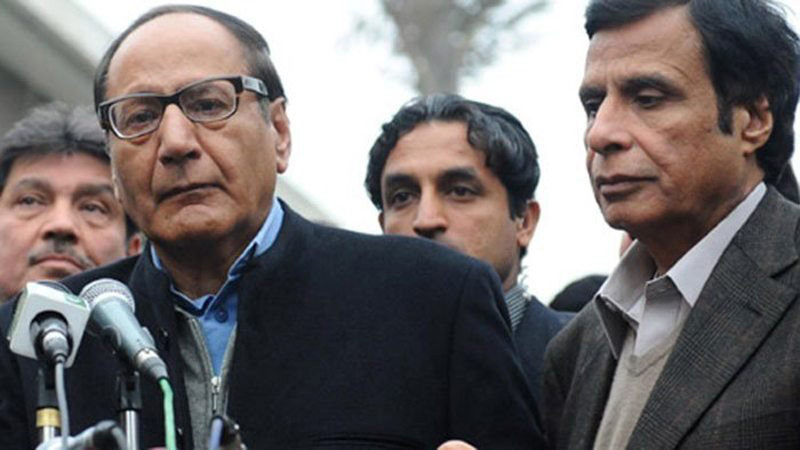 PML-Q leader Chaudhry Shujaat Hussain on Saturday once more insisted there were no differences within the party, as reports of him parting ways with Chaudhry Pervez Elahi began to circulate. “Have Elahi or I ever made any statement against each other?” retorted the PML-Q chief. “Ideological differences can occur, even between a father and son” he added, “that is no big deal”. Chaudhry Shujaat also said that he meets Elahi “every day” and that they “will offer Eid prayers together”. He also alleged that the rumours of differences between the political family were intended to “divert attention” and said that “all will have to work together for Kashmir”. The PML-Q chief did acknowledge however that some ideological differences do crop up every now and then. “But that does not mean anything [serious],” he said. Shujaat was of the view that the party elders must listen to the viewpoints of the younger generation. “Political rivalry must never give way to personal rivalry,” he said. In other remarks, he said that every prime minister who addresses the United Nations “takes points from a previous prime minister’s speech”. Geo News reported. In reference to Imran Khan, Shujaat posed the question: “Who is pushing Imran Khan to the wall?” He said that the Punjab by-elections will be held on July 17, and they should be free and fair. After July 17, the formation of the government will be known, he added. Earlier this year, addressing similar rumours of a rift among PML-Q leaders Shujaat clarified that his family and party are on the “same page”. According to a statement issued by the party, Shujaat said that all political decisions were taken in consultation with him and had his “full support.” Previously, speculations had been rife that a rift had emerged between the Chaudhry brothers in light of the no-confidence motion against former prime minister Imran Khan, turning the intra-party chasm irredeemably sour. While Chaudhry Pervaiz Elahi, along with his son Moonis Elahi had chosen to side with Imran Khan, party supremo Chaudhry Shujaat Hussain had sided with the PML-N. The simmering tensions, which had been reportedly bubbling for months, turned into an all-out opposition when the PML-Q nominated Chaudhry Hussain Elahi as the leader of opposition in NA – just hours after the party president Chaudhry Shujaat’s son Chaudhry Salik Hussain was inducted in the cabinet of PM Shehbaz Sharif. In June, after Chaudhry Wajahat Hussain’s announcement of his intentions to form another party, the PML-Q President Chaudhry Shujaat Hussain shrugged off the threat, saying a new party in the midst of countless others sprawling across the country, “a new party wouldn’t make any difference”. He denied the allegations of being bribed into embracing the new dispensation. “There are already hundreds of parties in Pakistan. What difference will it make if another one is formed?” he said.