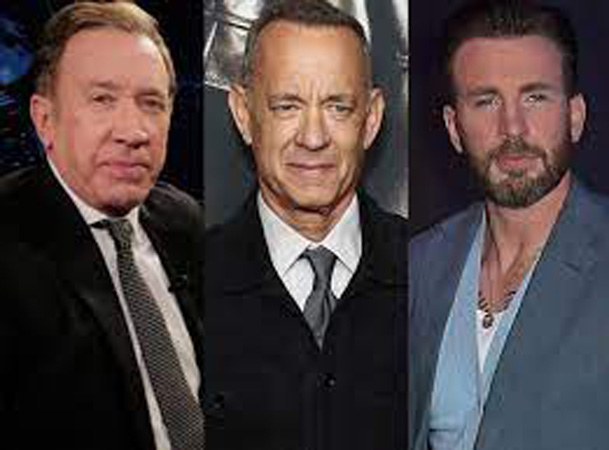 Tom Hanks just wants everyone to play nicely. The actor, who voiced Woody in the original Toy Story films, commented on Tim Allen not being cast in the titular role for Lightyear, which instead stars Chris Evans. The topic came up during a recent episode of CinemaBlend’s ReelBlend podcast, when Hanks was asked if it was strange to have his new movie Elvis, in which he plays Elvis Presley’s manager Colonel Tom Parker, in theaters opposite the Buzz Lightyear film.

“How about that?” the Oscar winner replied. “I wanted to go head-to-head with Tim Allen, and they didn’t let Tim Allen do it. I don’t understand that.”

But ultimately, Hanks is just glad people are returning to the theater after the shutdown due to the COVID-19 pandemic.

“Just as long as people come back to the motion picture theater,” he said. “I want to go back in the theater with a bunch of strangers and leave with something in common. That’s what I want to do and going to see a movie with them, I’m looking forward to that.” Hanks and Allen played Woody and Buzz Lightyear in all four Toy Story movies. Evans’ Lightyear tells the origin story of the space ranger Buzz Lightyear-the man who inspired the toy.

Both fans and fellow actors, including Patricia Heaton, have shared their reactions to the controversial casting decision. But what does Allen think of the move? As he recently told Extra, he’s trying to stay out of the conversation, noting it’s a “whole new team that really had nothing to do with the first movies.” Allen also expressed how he thought the film would be a live-action film with “humans, not an animated thing.” And while Lightyear seems like a “wonderful story,” the actor said, “it just doesn’t seem to have any connection to the toy.”

According to The Hollywood Reporter, having Allen return for Lightyear was not considered in the creative process.

“Tim really is the embodiment of the toy Buzz, and this isn’t the toy world, so it really doesn’t make sense,” producer Galyn Susman told the outlet. “There’s not really a role. It would just cause more confusion for audiences instead of helping them understand the movie we’re trying to tell.”

At the Lightyear premiere in June, Evans told E! News he was “really excited” to play Buzz Lightyear because he loves Pixar. Still, he acknowledged “there’s a lot of pressure because it’s obviously a character we know really well and that a lot of people hold close their hearts.”

“You want to make sure you pay homage to what Tim Allen did,” the Captain America star continued. “I mean, he’s Buzz Lightyear in my eyes. But the character itself is supposed to be the character the toy is based on, so you have to take what he di Avatar 2 Director James Cameron Issues a Warning on the Film’s Runtime

James Cameron’s Avatar sequel is going to be a long one, whether you like it or not. “I don’t want anybody whining about length when they sit and binge-watch [television] for eight hours,” Cameron recently told Empire. “I can almost write this part of the review. ‘The agonizingly long three-hour movie…’ It’s like, give me a f–king break. I’ve watched my kids sit and do five one-hour episodes in a row.”

For Cameron, the real problem with long movies is that people are afraid to go to the bathroom. But the director said, “It’s okay to get up and go pee.”

That being said, it’s fair if viewers don’t want to miss a single second of Avatar: The Way of Water. The director told Empire the movie will introduce fans to the Metkayina clan, a group of water dwellers co-led by Ronal, played by Kate Winslet. The film will see Cameron and Winslet reunite more than two decades after Titanic’s premiere.

The Way of Water takes place 10 years after the events of the first film and will follow Jake (Sam Worthington), Neytiri (Zoe Saldana), their three biological children Neteyam (Jamie Flatters), Lo’ak (Britain Dalton) and Tuktirey (Trinity Bliss), as well as their adopted daughter Kiri, played by Sigourney Weaver, who played Grace in the first movie. Not to forget their other adopted child, Spider (Jack Champion), a human orphan who was stranded on Pandora.

The Way of Water is due to premiere Dec. 16, while the third film is expected to hit theaters in 2024. Both sequels were filmed back-to-back by Cameron, who is thinking of recruiting another director for the fourth and fifth films. “The Avatar films themselves are kind of all-consuming,” Cameron explained. “I think eventually over time-I don’t know if that’s after three or after four-I’ll want to pass the baton to a director that I trust to take over, so I can go do some other stuff that I’m also interested in.”

Of course, that’s only if sequels four and five are approved by the studio. But Cameron already has the sequels all planned out, saying, “Movie four is a corker. It’s a motherf–ker. I actually hope I get to make it.” Avatar: The Way of Water premieres in theaters Dec. 16. Courtesy e! Newsd as a road map and acknowledge it.”