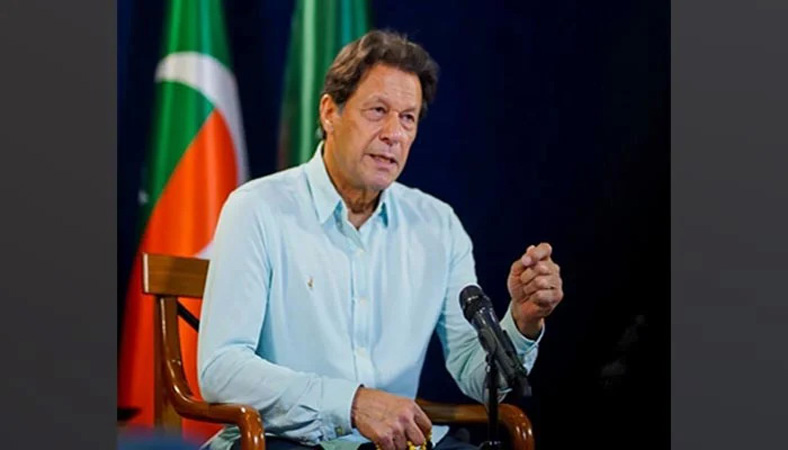 PTI Chairman and former prime minister Imran Khan Friday claimed that a man he called ‘Mr. X based in Lahore’ was trying to help the ‘thieves’ win the by-elections on 20 seats of the Punjab Assembly.

“I want to tell the Lahore man that whatever you do, it is you who will end up in embarrassment. This person’s attempts to rig the polls will go in vain,” he said while addressing a rally in Khushab.

The ex-premier said Punjab Chief Minister Hamza Shehbaz would not be able to secure his position after the by-elections.

“A man is based in Lahore who has a single mission to make these ‘thieves’ win the elections. I want to tell the Lahore man that whatever you do, it is you who will end up in embarrassment. “This Mr. X is colluding with the chief election commissioner to rig the by-elections. I just learned today that his wife has been given a top post in the customs [department] which can help her generate a lot of money. But despite this rigging, we will defeat them,” Imran said.

Iman said he wanted at least 10 youths to volunteer to “stand guard” during polling to prevent rigging. Imran said his opponents could win the by-elections if people did not vote for his party “in unison”. Imran said he had no disagreements with the ‘neutrals’, questioning why should he get into a quarrel with them. “Weakening the ‘neutrals’ means strengthening the enemy and only the country will suffer during this fight,” he said, says a news report. Regarding chances of his arrest, he said if the government wanted to arrest him, they could do so. “I have no fear because I haven’t crossed any red line.”

“Free and fair elections are the only solution to pull the country out of the crisis,” he said, adding that when a pro-people government will be formed only then will economy flourish. “If I would speak to the neutrals there would be only one stance – free and fair elections.”

The PTI Chairman said nobody was ready to speak to the leaders of this “imported government”, asserting that he will never join hands with the “thieves” even if he had to sit on the Opposition benches. “It is better to be in the opposition than to have a dialogue with PPP,” he said. He warned that if by-polls in 20 constituencies of Punjab were rigged, then it might harm the country. “What do I have to do? I can wait but it is the country that will suffer,” he maintained. Meanwhile, sharing a report by a local media agency on his official Twitter handle, the ousted premier said the findings of the Pattan report made it ‘obvious’ why the government and the Election Commission of Pakistan (ECP) opposed the use of EVMs in the upcoming polls.

Pattan – a not-for-profit organization – claims that the “use of EVM may eliminate 130 out of 163 poll rigging means” in the country.

“I am afraid neither the PDM [Pakistan Democratic Movement], who have perfected the art of rigging over the years want free and fair elections, nor does our establishment,” he added.

His tweets came despite the ECP’s statements earlier in the morning that the PTI chief’s allegations against its chief election commissioner (CEC) were “baseless”.

Imran disclosed that he nominated PML-Q’s Chaudhry Pervaiz Elahi as the candidate for chief minister against PML-N’s Hamza Shahbaz due to ‘blackmailing’.

This revelation came as Imran held a discussion with a team of journalists at Lahore’s Zaman Park on Friday.

Imran confessed that he was ‘blackmailed’ by the small parties in his coalition government. It was the same reason, Khan stated, he chose Elahi as the candidate for the chief minister for Punjab. He confessed that Elahi’s nomination prompted differences within his party and many party leaders were upset with him on the decision.