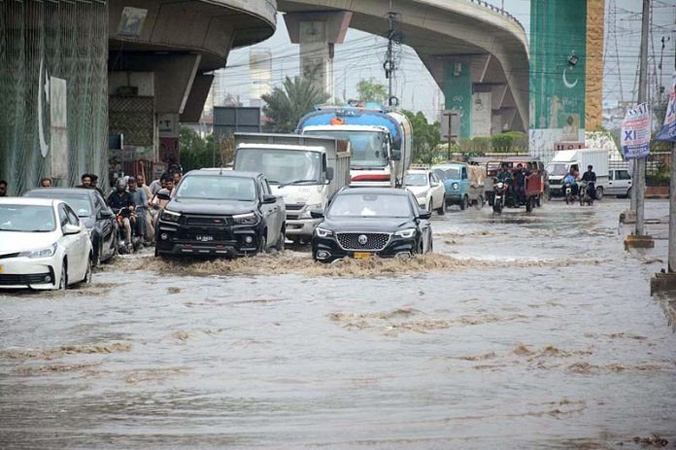 The incessant rains in Karachi continuing on Friday exposed the awful drainage system of the megacity. Several main arteries and streets were flooded due to choked drains. Hundreds of motorists were stuck on roads as the engines of their vehicles stalled due to water accumulation up to a few feet.

With plentiful clouds still over the city, the heavy and light showers are expected to continue on Saturday as well. The areas including Gulshan-e-Hadeed, National Highway, Malir, Model Colony, Gulshan-e-Iqbal, Gulistan-e-Jauhar, and University Road received heavy rainfalls. According to Pakistan Metrological Department (PMD), some 77 millimeters (mm) of rain was recorded in Gulshan-e-Hadeed while 44 mm was recorded in the Old Airport area and 31 mm in Jinnah Terminal. The unabated rains in the morning increased the water level in Malir Nadi and it overflowed.

Many motorists and pedestrians were stuck as the water boiled to the adjoining road but timely action by the rescue teams prevented any untoward incident. The affectees were immediately rushed to the hospital for medical aid. Several roads across the city were inundated due to poor drainage.

The road between Hasan Square and Lalukhet turned into an artificial pool and children started swimming in it. Several motorists who tried to move forward got stuck as well and eventually had to wade. With the absence of administration officials, the locals, on a self-help basis, geared up to remove lids from the manholes to drain accumulated rainwater. Further, the rainwater mixed with sewage flowed inside homes in Muhammad Ali Society – one of the city’s posh localities. The workers deployed by the solid waste management board (SWMB) and local government for cleaning sewers and storm drain in the area disappeared as it started raining. The citizens faced extreme difficulties as their properties were damaged. They complained that the administration lent a deaf ear to their repeated complaints.

The PDMA has also directed all the departments concerned to remain alert for the safety of lives and property of people. Citizens have been urged to avoid throwing waste or hides of sacrificial animals in sewer lines or manholes as it could chock the sewerage system.

It is pertinent to mention that Pakistan Meteorological Department has forecast heavy rains from July 9 to 12 across the country as a strong system of monsoon is expected to enter the country from Saturday. Heavy rain with thunderstorm is expected in Rawalpindi, Gujranwala, Sargodha, Sahiwal, Faisalabad and Lahore divisions during the days which could cause landsliding in Murree and flood situation in nullahs and streams of the areas.