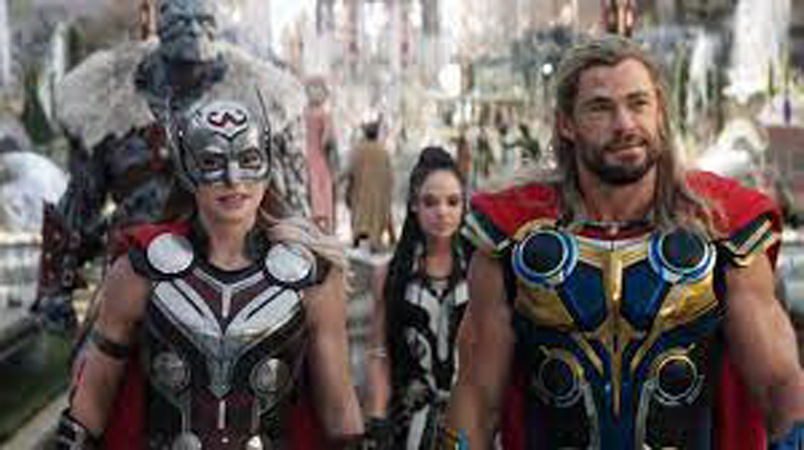 The last full Thor movie was the overstuffed 2017 Thor: Ragnarok, with the God of Thunder dealing with dueling brother and sister issues, the imminent destruction of his planet, a boozy sidekick, a huge dog, pal Hulk having a panic attack and the death of his father.

It was Taika Waititi filmmaking at its most intense, with slo-mo sauntering, stupid antlered headdresses, slicing swords and laser cannons, capes and undead soldiers, a hair-cropped Thor, a typically unbalanced Jeff Goldblum character, a prophecy, alien spacecrafts and lots of Led Zeppelin.

If you thought that was bananas filmmaking, its sequel is the whole fruit basket.

Waititi is back as the co-writer, director and the voice for the stony Korg, with Chris Hemsworth as our space Viking, a man who really needs to get more credit for taking Thor over the years from glum to hysterical. His ability to pronounce superhero things dramatically and then become a goofball is endlessly endearing. Also back are Tessa Thompson as Valkyrie and Jaimie Alexander’s Sif.

One problematic character back is Jane Foster, Thor’s ex whom he still pines for eight years after they broke up and she skipped the third film. But now Foster – played by Portman – has his old magical hammer, Mjolnir, and has become a superhero of her own, the Mighty Thor. She’s working on a catchphrase, like “Eat this hammer!” 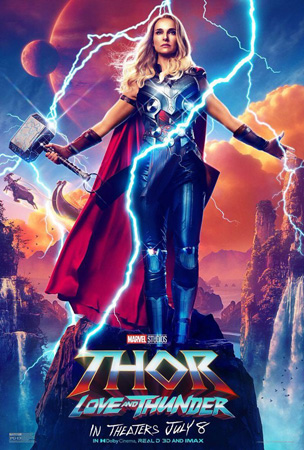 Thor, of course, has moved on – not with his romantic feelings, but with his favoured weaponry. He wields the enchanted axe Stormbreaker now. He has no eyes for Mjolnir – or does he? “We good? I know it’s a little weird having my ex-weapon around,” he asks his axe in a deliciously loony scene, basically reflecting a love triangle between a Norse god and two metal armaments.

Our villain this time is superb: Christian Bale plays the deliciously named Gorr the God Butcher. A once-pious man who prayed in vain to the deities, he has now decided to wipe them out after having a personal setback. Bale is so creepy and so committed that you can feel his hatred melt your popcorn. Another punch of the bizarre comes from Russell Crowe, who plays Zeus as a vainglorious tyrant with a Roman outfit (a riff off Gladiator?) and an atrocious Mediterranean accent. He is surrounded by lackeys – some called Zeusettes – and frustrates Thor, even stripping him of his clothes, to the delight of many in the audience. “You know what they say: Never meet your heroes,” says the Viking. The whipsaw from death and suffering to idiocy is staggering, with Jennifer Kaytin Robinson credited alongside Waititi for a script that seems like it was pasted together after gerbils ripped up a bag of words. You go from a hospital room on Earth dealing with a terminal illness to Thor dressed as a hot dog to a shadow realm in low gravity where the film goes completely black and white. There is very little logic and the connections between scenes are tenuous, giving the film a feeling of not building to anything clear.

The film is stacked with cameos – many of which critics aren’t permitted to reveal – but look for Hemsworth’s real-life wife and one of his sons, a bunch of fed-up Guardians of the Galaxy and a pretty famous comedienne playing Cate Blanchett’s role from Ragnarok.

What to make of this glorious, intergalactic mess? There is no better answer than to swipe one of our hero’s catchphrases: “What a classic Thor adventure, Hurrah!” Thor is out in UAE theatres from July 7.