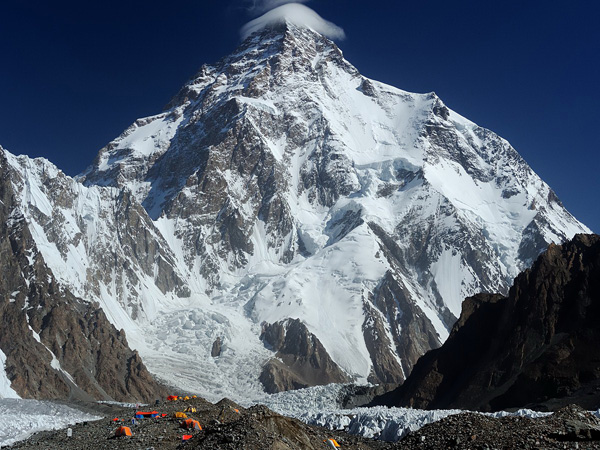 SKARDU: Pakistan is enjoying a bumper climbing season with around 1,400 foreign mountaineers bidding to scale its lofty peaks — including hundreds on the 8,611-metre (28,251-feet) K2, the world’s second highest. “It is a record number,” Raja Nasir Ali Khan, tourism minister of Gilgit-Baltistan region, said. The country is home to five of the world’s 14 mountains higher than 8,000 metres, and climbing them all is considered the ultimate achievement of any mountaineer. Karrar Haidri, secretary of the Alpine Club of Pakistan, said there were 57 expeditions planned for 23 Pakistan peaks this season — with 370 climbers having a crack at K2, known as “the savage mountain”. Besides being far more technically difficult to climb than Everest, weather conditions are notoriously fickle on K2, which has only being scaled by 425 people since 1954.

More than 6,000 people have climbed Everest since Edmund Hillary and Tenzing Norgay first reached the top in 1953 — some of them multiple times. Haidri said climbers this year include 90 women — including at least two Pakistanis aiming to become the country’s first to scale K2. Russian Oxana Morneva is leading a team on the mountain, having failed in her own attempt in 2012 when she was forced back after injuring her knee. “My rope was broken by falling rocks,” she said. She said she had no apprehension about returning.

“When we go to the mountain we have to be peaceful inside, and we have to know what we are doing,” she added. Around 200 climbers will attempt to scale the 8,051-metre Broad Peak, while similar numbers will try Gasherbrum-I (8,080 metres) and Gasherbrum-II (8,035 metres). A 36-year-old Norwegian climber, Kristin Harila, is also aiming to reach the world’s 14 highest mountain summits in record time. Having already climbed seven peaks of over 8,000 metres, Harila hopes to match, if not beat, Nepali adventurer Nirmal Purja’s ambitious six months and six days record. The summer climbing season that started in early June lasts until late August.