Farah Khan wanted ‘to run away’ in first year of marriage 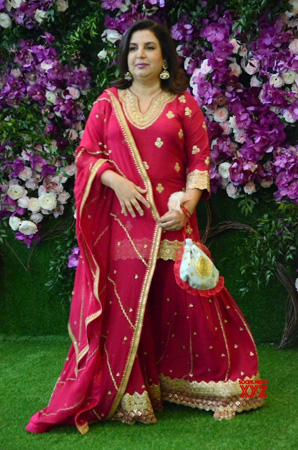 Bollywood filmmaker and choreographer, Farah Khan who is married to writer Shirish Kunder, shared her experience of married life.

During a recent outing at a TV show ‘Swayamvar: Mika Di Vohti’ – a reality show where girls are in a contest to be the bride of Indian singer Mika Singh – Khan spoke about her experience of marital life.

When a contestant on the Swayamvar show said that her parents wants her to get married at the right age, the ‘Om Shanti Om’ director rejected the idea of anyone getting married for the sake of one’s age.

“I feel that there is no standard age for getting married, you should marry when you find the right person,” Khan told the contestant. She also revealed, “I wanted to run away in the first year of my marriage because it’s very difficult to adjust.”

Furthermore, speaking about the ‘perfect girl’ for her brother, Khan stated, “Mika [Singh] is a very sensitive person, only a sorted girl can handle him.”

It is pertinent to mention that Farah Khan tied the knot with Bollywood editor-composer Shirish Kunder – whom she met while working on her film ‘Main Hoon Na’ – in 2004. She gave birth to triplets: two daughters, Diva and Anya, and a son, Czar in 2008.