* Syra is nailing a simple look in the stylish blue top 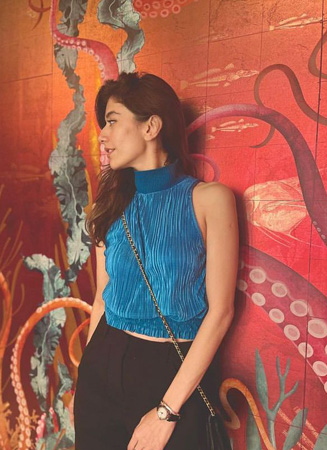 The gorgeous Pakistani actress, Syra Yousuf has posted some photos of herself on Instagram and it went viral.

Syra is undoubtedly a timeless beauty and has won hearts with her fine acting skills and attractive personality. The beautiful actress captioned her post, “Meet me in the middle of your story, when the soul is worn but wise – Angie Weiland Crosby.”

Syra is nailing a simple look in this stylish blue top.

The viral picture sees her wearing a west outfit with a smile. The click got hundreds of thousands of likes in no time and heart-warming comments from her fans. People are totally in love with Syra’s new pictures.

Syra Yousuf also shared a picture of her spending leisure time at an exotic location.

She penned: “You are the sky. Everything else is just the weather” The elegant actress, who has worked in a music channel as a video jockey, is one of the most versatile celebrities in the entertainment industry. Her performances in super hit serials like Tanhaiyan Naye Silsilay, Sinf-e-Aaahan and film Ho Mann Jahaan.

Previously, Syra Yousuf said she refused to work in a Hollywood film because she got an offer to play the role of a bold character.

She was married to Shahroz Sabzwari in 2012.