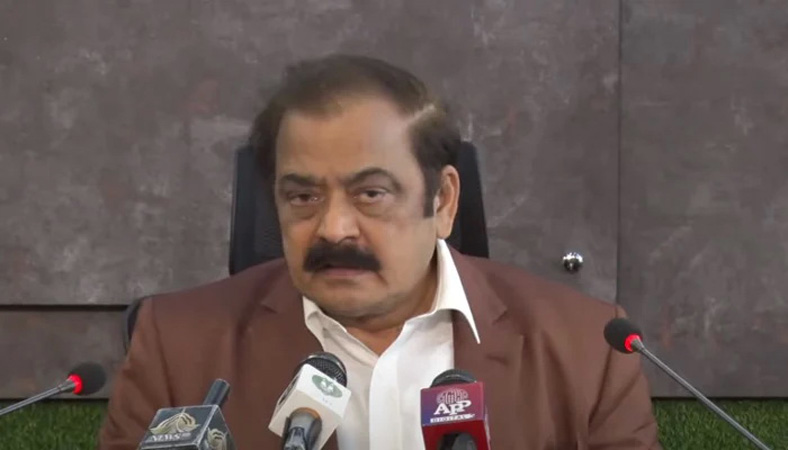 Interior Minister Rana Sanaullah Wednesday categorically said the government would not be influenced by the threats of Pakistan Tehreek-e-Insaf (PTI) Chairman and former prime minister Imran Khan. Referring to the recent video of Imran Khan in which he claimed that they were being harassed, teased or pushed to the wall, Sana asked if any false cases were registered against him or he was put in Kot Lakhpat Jail or provision of medicines was stopped to him, reports APP.

Addressing a press conference in Islamabad, he said the previous regime had taken all shameful actions against their political opponents and critics and lodged baseless cases against them during their three and a half years rule.

He asked if mere asking questions about corruption, embezzlement of Rs50 billion public money, Rs5 billion assets, transfer of 458 kanals in the name of Bushra Bibi and acquiring 240 kanal land in the name of Farah Gogi at Bani Gala came under harassment. He said the PTI chief should also inform the nation about the 2014 sit-in and on whose instruction he held that gathering for months. The minister said only an inquiry had been started into alleged corruption cases of the former government. No response has been received in ‘Toshakhana’ embarrassment of Rs50 billion in public money and Rs5 billion assets cases so far from Imran Khan, the minister said. Sana said Imran Khan should also tell the nation about the Rs150 million worth of drug which was claimed to have been seized from his (Sanaullah’s) possession.

He said Imran should be ashamed of himself for making claims that he was being harassed and isolated. “Have you not been doing this to your opponents for 3.5 years? No such thing is being done to you,” he said. Referring to a drug case against him, he urged the Chief Justice of Pakistan to take a suo motu notice of the incident and probe the issue. “If I was found involved in any such activity, the court should award me capital punishment,” he said. However, he said if he was not involved in the drug case, then the culprits behind this heinous crime should be given at least life imprisonment. Whether Imran Khan wanted power or NRO, the minister questioned.

Replying to a question, he said the dialogue process with the Tehreek-e-Taliban (TTP) would be taken forward under the supervision of parliament. He said the military leadership gave a comprehensive briefing to the Parliamentary Committee on National Security and it was decided to set up a committee comprising government officials and representatives of political parties to look into the matter with political consensus. He said the parliament would decide to accept or reject any outcome in that regard.

To another question, he said PTI had been exposed for opposing the people-welfare plan of the Punjab government for provision of free electricity to consumers up to 100 units. He said the election was being held in few districts while the relief was for the entire province. Sanaullah also said any recording – either audio or video – made to expose a crime was not a crime unless it was done to blackmail someone.

The audio has sparked a debate about the privacy issues, while the PTI has demanded the top court to take notice of the leaked audio. There are reports that the alleged audio of former prime minister Imran Khan talking to his principal secretary Azam Khan may also be released. “If a recording is made to expose a criminal offence, it is not a crime and if a recording is done to blackmail, it is a crime,” the minister said. “No one can even claim that it is a violation of their privacy,” the minister asserted.

Dr Khalid was allegedly instructed by Bushra Bibi that these issues should not be hushed down and that trends should be generated to highlight how “Imran Khan and the country were being betrayed”. In the purported clip, Bushra Bibi also allegedly told Arslan Khalid to link criticism against her and Farah Khan, a friend of the former first lady who flew out of Pakistan in April, with treason. As per the clip, Dr Khalid assured the ex-first lady that the social media team would follow the instructions and label the PTI critics “traitors”.