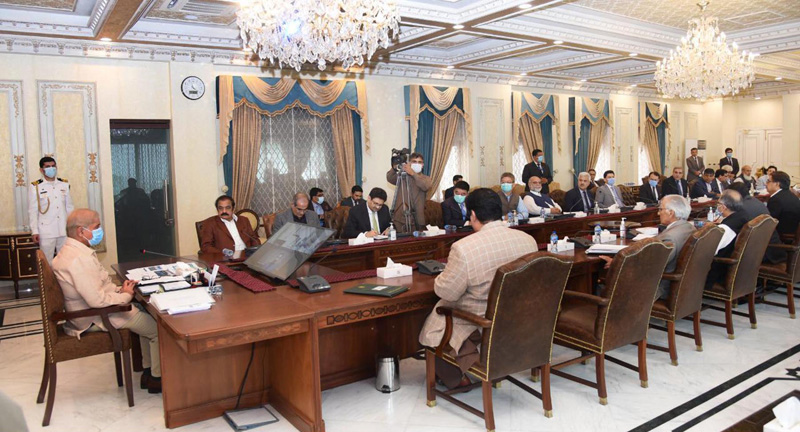 Prime Minister Shehbaz Sharif Wednesday said he had ordered an inquiry into the criminal delay in Gwadar breakwater project as the Pakistan Tahreek-i-Insaf’s government had ignored it despite availability of grants.

On his Twitter handle, the prime minister said $445m grant, $484m soft loan and feasibility were available but it baffled the mind as to how the previous government ignored the project. From energy to infrastructure, every project suffered costly delays under the PTI regime, he added. “In a meeting today, I ordered inquiry into criminal delay in Gwadar breakwater project. It baffles mind how PTI govt ignored it despite availability of $445m grant, $484m soft loan & feasibility. From energy to infrastructure, every project under PTI suffered costly delays,” the prime minister posted a tweet.

Earlier, the prime minister chaired a meeting to review different development projects in Balochistan and Gwadar. He directed the PM’s Inspection Commission chairman to submit a comprehensive report over such criminal negligence within one week. In a related tweet, he stressed that time for presentation was over as it was time for action. He said Gwadar was not just about infrastructure development, being part of CPEC (China Pakistan Economic Corridor), it had political, economic and strategic value.

He further resolved that turning Balochistan’s backwardness into prosperity was his mission and their collective responsibility. “Time for presentations is over. Time for action is now. Gwadar is not just about infrastructure development; being part of CPEC, it has political, economic & strategic value. Turning Balochistan’s backwardness into prosperity is our collective responsibility & my mission,” he posted a tweet. Briefing the prime minister in the meeting, the secretary maritime affairs said the breakwater project at the Gwadar port under concession agreement had to be constructed for which $445 million grant and $484 million loan was provided by the Chinese government but it hit the snags. The prime minister said due to its location, the Gwadar port was an important and most suitable hub for the global trade. Through the port, they would have to ensure supply of imported goods to the upper and northern areas of the country.

He said for the purpose, there should be best and efficient road and railway infrastructures, adding that through hard work, they would have to move ahead and remove all the deprivation of the province. The meeting was attended by Minister for Finance Miftah Ismail, Minister for Maritime Affairs Syed Faisal Sabzwari, Minister for Energy Engineer Khurram Dastagir, Minister for Railways and Aviation Khawaja Saad Rafique, PM’s Special Assistant Tariq Fatemi and other high officials, the PM Office Media Wing said in a press release. The prime minister also directed for taking of all the steps to ensure Chinese investment in Gwadar. so as to promote exports and provide employment opportunities to the people, especially the residents of the area. In this regard, the prime minister directed the Balochistan chief secretary and the secretary planning to formulate a feasible plan for investment in food, agriculture and petrochemicals in consultation with the Chinese companies.

The Balochistan chief secretary, secretary maritime affairs, secretary railways, National Highway Authority (NHA) chairman and China Overseas Port Holding Company Pakistan (COPHC) chairman apprised the prime minister of the progress on different uplift projects. The NHA chairman briefed the prime minister about the access of upper and northern areas of the country to the Gwadar port through CPEC’s eastern and western routes. The prime minister also directed the NHA, and ministries of maritime affairs and planning to submit after Eid, a joint review report, regarding ensuring supply of trade goods.

The COPHC chairman apprised that a plant with capacity of 1.2 million gallons water would soon arrive Pakistan and start functioning by the end of current year. The chief secretary further briefed the prime minister that out of the total 35,500 households in Gwadar, 31,000 were on-grid whereas 4,500 others had been off-grid. To meet requirements of the on-grid homes, a mini solar park on the basis of built, operate and transfer (BOT) basis in collaboration with the Quetta Electric Supply Company (QESCO) and private sector was being installed. NEPRA (National Electric Power Regulatory Authority) would issue a power purchase agreement in that regard, he added.

For the supply of power to the off-grid households, the secretary said, 3KW solar home stations were being installed with an amount of Rs1.8 billion. The prime minister directed the relevant authorities to complete the entire process through transparent tendering. He advised that the solar system providing company should be made responsible for a three-year after sale service to facilitate the public. He directed the secretaries concerned to form a complete strategy in that regard.

Besides, the prime minister also directed the chief secretary to ensure security of the staff working on different projects in the province and mapping of all the uplift projects.

He asked for formulation of a comprehensive security plan in collaboration with the interior ministry and law enforcement agencies, adding that the dream of economic prosperity could not be materialized without peaceful environment. The secretary railway briefed the prime minister over the linkages between Gwadar and other cities of the country and the progress on the new railway tracks. The prime minister directed to ensure all the possible and effective steps in that regard.