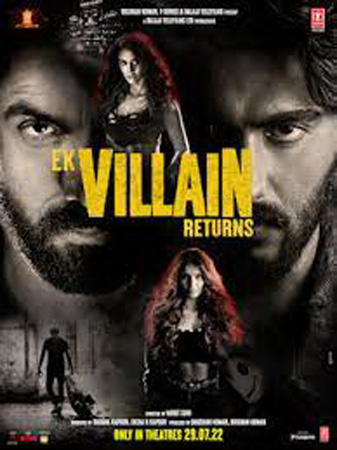 Makers of the upcoming thriller film `Ek Villain Returns` have unveiled their first song `Galliyan Returns` which reminds of the original track `Galliyan` from `Ek Villain`. The video of the song assembles the star cast and showcases the intense romance and hard-hitting action sequences of John Abraham -Disha Patani and Arjun Kapoor – Tara Sutaria. At the end of the song, Disha can be seen giving an intense and villainous look while hugging John.?`Galliyan Returns` is a dark reprised version of the earlier track `Galliyan` which showcased the romantic story of the lead cast Sidharth Malhotra and Shraddha Kapoor. The song has been sung and composed by Ankit Tiwari and is written by lyricist Manoj Muntashir. This is the first time in the history of Bollywood, that the makers of the song including director Mohit Suri, singer-composer Ankit Tiwari and lyricist Manoj Muntashir, have reunited to recreate the song.?Soon after the song was out, fans poured their reactions on social media about the dark reprised version of a romantic track. “The best song i have heard this year is #GalliyanReturns. Its lyrics is so beautiful ” a user commented. Another user wrote, “What a great song playing it on loop and enjoying as well #GalliyanReturns”.?The song can be heard on the `T-Series` YouTube Channel.

Meanwhile, the trailer of `Ek Villain Returns` was unveiled recently and gathered positive responses from the netizens. The film marks the first collaboration of actors John Abraham, Disha Patani, Arjun Kapoor and Tara Sutaria. Directed by Mohit Suri, the film is jointly produced by T-series and Balaji Telefilms and is slated to hit the theatres on July 29, 2022.