Imran threatens to name all characters behind conspiracy 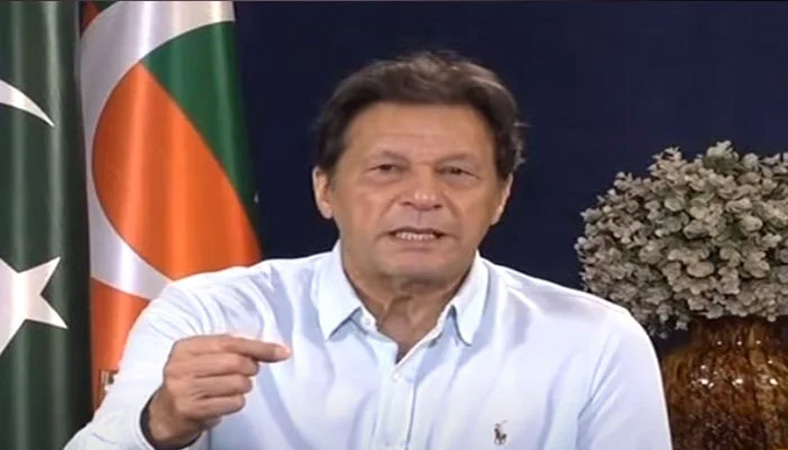 PTI Chairman and former prime minister Imran Khan Tuesday threatened that he would feel compelled to unmask those who were involved in the ‘conspiracy’ to oust his government if harassment of him and his party continued. Speaking in a video message from Islamabad, Imran said, “If we are pushed to the wall and harassed, then I will be forced to speak up and will lay bare everything before the nation about what happened.”

Imran said he was “silent” despite knowing everything about “who did what” to force his ouster. The ex-premier said he did so for the nation’s sake so the country suffers no damage, adding, “I know how this conspiracy happened and who is involved.” Imran said he had already recorded a video detailing information about those who had committed ‘treason’ against the country. He said the video will be released as soon as something happened to him – though it will dent the national interest. Imran had first talked about the video in May when he claimed his life was in danger. Imran claims he was ousted from the top office by the foreign powers through the local players for pursuing an independent foreign policy.

In his message, Imran likened his ouster to the fall of former prime minister Zulfikar Ali Bhutto’s government. He alleged that the common element in both government changes was the disapproval of the US about Pakistan pursuing an independent foreign policy. He came down hard on the coalition government members claiming that they only cared about getting “NRO-2”. Imran said crowds of people pouring onto the roads on his call testified to the fact that the nation had refused to accept the coalition government.

“Whoever was involved in the conspiracy should think that people are not accepting these thieves and traitors,” he added.

He lambasted the government for mistreating, threatening and harassing journalists, particularly those who seemed to be favoring the PTI.

“I’ve never seen such fascism in Pakistan and the kind of fear that is being spread. I ask this question today from the nation and our judiciary, are fundamental rights suspended in Pakistan? Is there a martial law [in place]? Which constitution permits this?” Imran also alleged that the administration was involved in rigging the upcoming Punjab by-elections and called on the people to come out and vote to ensure the PTI’s win. He said cases of corruption had been registered against the party leaders to shut them up. “This country is moving towards fascism and anarchy. The coalition government will accept Israel as a state. It will provide Pakistan’s bases to the United States, and it will discard the Kashmiri people to establish better relations with India,” he continued. Berating PML-N Vice President Maryam Nawaz, Imran said “she should have gone to jail over her Calibri-font case.”

Imran said Pakistan could only be saved from the crisis through transparent elections adding that the Election Commission of Pakistan (ECP) could not be trusted. “This is a decisive moment… if you surrender before the idol of fear, then they [coalition government] will cause further destruction in the country,” he said and urged people to vote for the PTI candidates in the by-elections as the fate of CM Hamza-led Punjab government hinged on it.

“The PTI has to win the by-elections despite the rigging,” he added. Imran said “fascists tactics” were being used to impose thieves on the country and all state institutions had been “destroyed” to support the incumbent rulers.

Separately, in a tweet, Imran said the nation continued to suffer at the cost of “imported government brought in through US regime change conspiracy” at a time when his government had stabilized the economy. “Exports, which stagnated in the previous PMLN Govt at $25bn, crossed $30bn for the first time this year to $31.76bn,” he added. “This was despite the sharp slow-down after regime change conspiracy operationalized. In July ’21-March ’22, under PTI Govt exports grew 27%. In June under cabal of crooks export growth slowed to 5.8%,” the former premier wrote in a follow-up tweet.