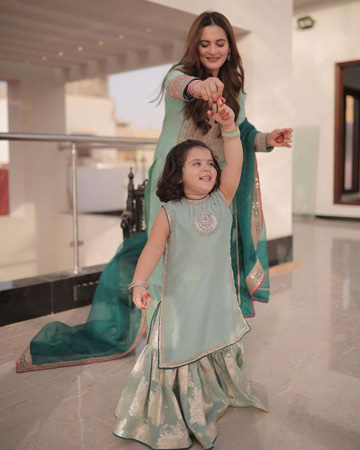 Showbiz A-lister Aiman Khan has social media in awe with an adorable video of her daughter Amal Muneeb, which has gone viral.

‘Baydardi’ actor took to her Instagram handle on Sunday and shared a short video of herself and Amal Muneeb from their Nathiagali vacation. The loved-up video sees Khan holding the toddler in her hands and as she asked her daughter for a kiss.

“My big girl,” the actor captioned the viral video on the photo and video sharing application followed by a red heart. The snippet watched by thousands of Instagrammers, within a few hours, not only received thousands of likes from social users but also had several admiring comments for the two on the video post.

Earlier, she shared a series of posts from the same vacations of the family.

Khan, who is one of the most followed celebrities on social media with at least 10.5 million users in her followers’ list on the platform, frequently treats her fans with glimpses from family day outs and vacations, along with visuals from her photoshoots and projects’ BTS. Aiman Khan and her twin sister Minal Khan had been among the popular child artists in Pakistan showbiz. She rose to stardom with her outstanding performance in ‘Meri Beti’, while her performances in ‘Baydardi’, ‘Zindaan’, ‘Shehzada Saleem’ and ‘Bay Qasoor’ were also highly praised.