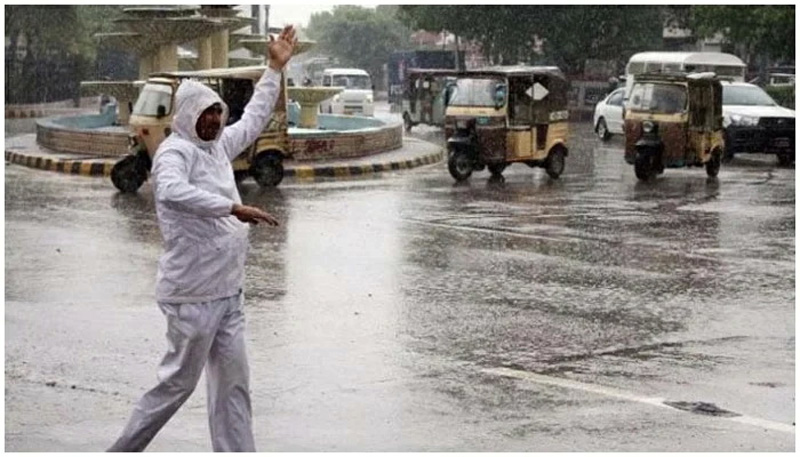 Moderate to heavy rain coupled with strong winds lashed the central and northern areas of Karachi on Monday afternoon under the season’s first monsoon spell, bringing citizens some respite from the sweltering heat. According to the Met Office, the highest amount of rain was recorded in Surjani Town (23.2mm), followed by Gulshan-i-Maymar (21.2mm), North Karachi (9mm), Saadi Town (2.1mm), Nazimabad (1mm), University Road (1mm) and Jinnah Terminal (1mm). Chief meteorologist Sardar Sarfaraz said intermittent rainfall was reported in Gadap City, Bahria Town, DHA City, Gulistan-i-Jauhar, Sharea Faisal, North Karachi, Taiser Town, Malir and Nazimabad. He went on to say that light rain was predominantly reported across the city. However, heavy showers were recorded in the outskirts of the metropolis, he added. During the next two days, the weather will remain cloudy while intermittent rainfall is expected, he said. Karachi Administrator Murtaza Wahab said the “entire administration” was on ground to deal with any situation. “Traffic congestion will be a major challenge since people leave their offices at [the] same time as soon as it starts raining. Would request people to avoid unnecessary movement or schedule their movement to avoid traffic,” he added. Separately, Malir SSP Syed Irfan Ali Bahadur said that all police officials had been alerted and authorities were monitoring the rain-affected areas closely. Patrolling teams have been formed to prevent any untoward incident, he said, urging people not to stand near trees, electricity poles, signboards and billboards.