News COAS to be appointed ‘as per set procedure’: govt 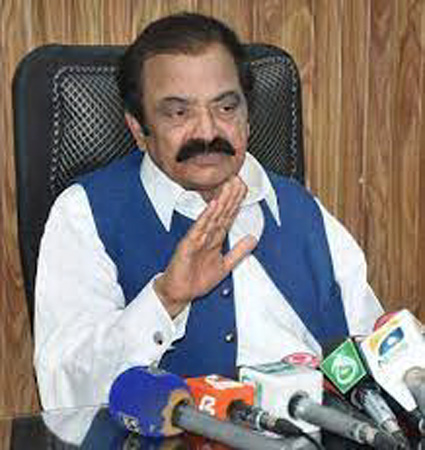 Interior Minister Rana Sanaullah Sunday said the new army chief will be appointed on time according to the set procedure.

Commenting on the increasing inflation during a ceremony in Faisalabad, he said the International Monetary Fund (IMF) had “red-marked” Pakistan after the Imran Khan-led government increased subsidies.

He said the IMF demanded that subsidies should be reduced to zero for revival of the $600 billion bailout program.

“As a result of Imran’s policies, the coalition government had to take tough measures and make the masses go through hardship to save the country from further catastrophe,” he said.

Criticizing the PTI Chairman and ex-premier Imran Khan, Sana said, “Those who bestowed upon him the titles of ‘honest and trustworthy’ are now hiding their faces from the public”.

He also referred to the alleged leaked audio of former first lady Bushra Bibi in which she could be heard instructing PTI’s Dr Arsalan Khalid to run traitor trends on the social media. He said everything had become clear after Bushra Bibi’s audio surfaced.

“Their deeds are coming to light, everything has become clear. To him, even those who had allied with his government are dacoits. He made the whole nation poor and destitute,” the minister said.

Commenting on the PTI’s public meeting in Islamabad on July 2, the interior minister said 8,000 seats were set up at the Parade Ground, and people were brought in from Khyber Pakhtunkhwa. “There were only 2,000 attendees from Islamabad”.

Separately, Federal Minister for Planning and Development Ahsan Iqbal said Prime Minister Shehbaz Sharif and the military leadership will mutually decide on the next chief of army staff (COAS) but for now, the extension of the COAS Qamar Javed Bajwa or the appointment of new army chief is not on the table.

He criticized the Imran Khan government for destroying China-Pakistan Economic Corridor (CPEC) projects especially the Gwadar deep-sea port, which he revealed could no longer dock larger ships after falling to neglect under the PTI government.

Ahsan Iqbal said the Imran Khan government did not spend a single dollar on Gwadar although China allocated $123 million for the cleaning of the silt. For four years, the maritime affairs authorities kept requesting for funds to carry out maintenance dredging but in vain, he said.