Ryan Seacrest and Aubrey Paige turn up the heat in Ibiza

* In photos from their holiday, the pair appear more in love than ever as they pack on the PDA while enjoying a meal together 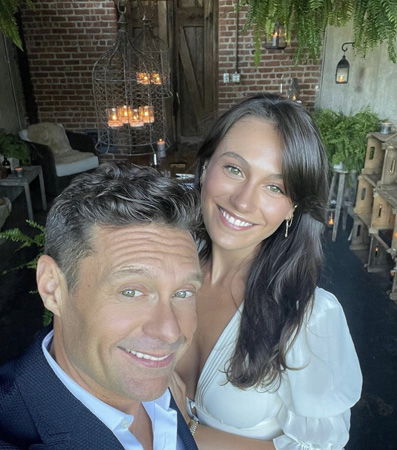 Ryan Seacrest and girlfriend Aubrey Paige have taken their romance abroad again for another sizzling getaway.

The American Idol host, 47, and model, 24, were spotted together on vacation on the Spanish island of Ibiza this week. In photos from their holiday, the pair appear more in love than ever as they pack on the PDA while enjoying a meal together. Fully in vacation mode, Aubrey can be seen wearing a white halter top, sunglasses, and patterned trousers, while Ryan matches her in a white t-shirt, sunglasses and white fedora. Elsewhere on their vacation, the couple were also spotted taking in the local sights of the city while strolling along the beach.

As the pair took in the stunning views, Aubrey sported a black floral dress, sunglasses and flip-flops, while Ryan wore a navy shirt and shorts combo, complete with flip-flops and the same fedora.

Ryan and Aubrey’s romantic getaway comes just three weeks after they made their red carpet debut as a couple at the Tribeca Film Festival in New York City.

They attended the premiere of Jennifer Lopez’s new Netflix documentary Halftime together on June 8. While the pair have largely kept their relationship away from the public eye, Ryan does often make an appearance on Aubrey’s Instagram.

Last month, she shared a collection of photos of the pair enjoying a rustic, candlelit meal together with the caption, “Every meal tastes better with you.”

In May, Aubrey also posted pics of the couple on vacation together in Rome, Italy. And, in a New Year’s Eve post, Aubrey revealed that getting to know the Live with Kelly and Ryan star was the highlight of her year. “Safe to say the best part of 2021 was meeting the most incredible man,” she wrote. “Wishing everyone love, happiness, safety & health in 2022.”