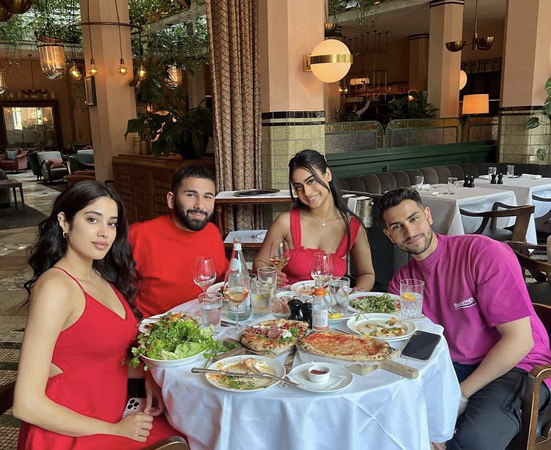 Bollywood actress Janhvi Kapoor, who made debut in Bollywood industry in 2018 with Shashank Khaitan, is one of the most loved actresses in the current generation. The 25-year-old often drops photos and videos on social media and keeps her fans entertained.

Janhvi was recently in Amsterdam where she was having the time of her life with family and friends. The actress on Sunday gave a sneak peek of her fun-filled trip to her fans. She shared a series of pictures on her Instagram but what caught everyone’s attention was the picture of the actress enjoying a meal with Ajay Devgn and Kajol’s daughter Nysa Devgn. Janhvi is popular for her bold fashion choices and so does Nysa. Even though Nysa is yet to make her acting debut, she enjoys huge popularity on social media and is widely loved.

In a series of pictures shared on social media, Janhvi is seen wearing denim dungarees and a crop top in one. In one of the photos, she is seen twinning with Nysa Devgan as they are posing with two other friends in a restaurant. Sharing these pictures, Janhvi wrote, “lost in Amsterdam”.

Earlier, she had shared a picture of her enjoying a boat ride during the shoot of her upcoming film ‘Bawaal’. Taking to Instagram, the ‘Dhadak’ actor shared a story which portrayed her enjoying a serene boat ride with her co-star Varun Dhawan’s wife, Natasha Dalal along with a couple of friends.

Janhvi had her hair tied back and donned a white top while Natasha wore a black outfit, keeping her brown hair loose. The group selfie shared by assistant director Sonia Kanwar was reshared by Janhvi. All the four people in the boat were spotted with smiles. “JK’s boat party! She planned this for days!” captioned Kanwar with a high five emoji.

Janhvi Kapoor was last seen in the horror-comedy ‘Roohi’ opposite Raj Kumar Rao and Varun Sharma. Currently, she is making news for her upcoming movie ‘Bawaal’. Helmed by Nitesh Tiwari, the movie will also star Varun Dhawan and will mark Janhvi’s first collaboration with Varun. The drama film is scheduled to hit the big screens on April 7, 2023.

Besides, she will also be collaborating with Rajkummar Rao for the second time in ‘Mr and Mrs Mahi’ and will also be seen in Boney Kapoor’s production ‘Mili’ with Sunny Kaushal and Manoj Pahwa.

Recently, the first look of ‘GoodLuck Jerry’ was released and it has created a lot of hype, and fans are eagerly waiting to see Janhvi Kapoor in a new avatar.

The film is directed by Sidharth Sengupta and written by Pankaj Matta. It also stars Deepak Dobriyal, Mita Vashisht, Neeraj Sood and the late Sushant Singh. It is scheduled to release on Disney+Hotstar on July 29.