Prices of sacrificial animals skyrocket ahead of Eid 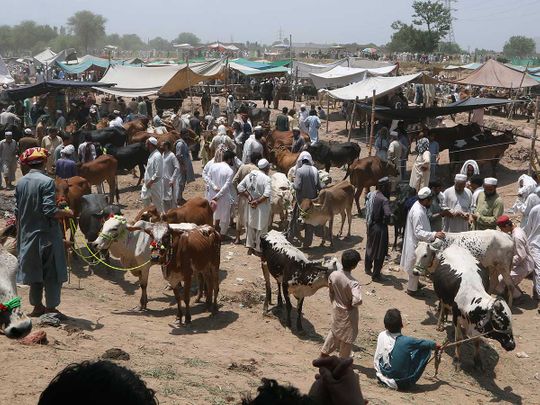 RAWALPINDI: The prices of sacrificial animals, especially of goats and sheep have increased manifold with only six days left in Eidul Azha. Eleven makeshift cattle markets were set up in Rawalpindi district which witnessed a significant rush of the buyers on the last weekend before the Eid festival.

The cattle markets were almost full, but the buyers were leaving empty-handed because of exorbitant prices of the sacrificial animals. At the moment, the animal prices are quite high and beyond the reach of the common man, says a citizens, Fahad. Majority of the sellers of sacrificial animals are demanding very high rates as there is no price regulatory mechanism introduced by the administration.

A visit to different sale points revealed that the price of a normal size goat/sheep/lamb ranges from Rs 60,000 to Rs 80,000 whereas a cow and calf from Rs 150,000 to Rs 300,000. On the other hand, sellers of sacrificial animals said that main reason behind high prices of animals were increased costs of transportation and animal fodder.

The residents of various localities have decided for combined sacrifices with the cooperation of various religious and social organisations including local seminaries and mosques.