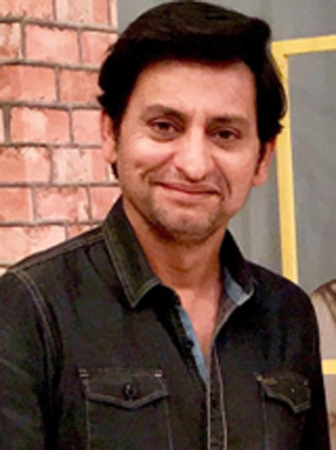 Saleem Mairaj is one of the nest talents we have in the industry. He performs every character to perfection. Be it dark characters like in Na Maloom Afraad, Kashf and Pehli Si Mohabbat or heart touching characters like the ones he played in Raqs e Bismil and Alif, Mairaj breathes a new life in to characters written in script and make them memorable. Saleem Mairaj was a guest on Hasna Mana Hai where he shared how he got in the industry. He once gave a speech at a local function because the person who was supposed to give that speech couldn’t reach there. Luckily his fairy god mother was there to watch the show. He was then approached by her to act in the theatre where he made a name for himself and later proved his mettle in dramas and films. His fairy god mother who scouted such a great talent is none other than Sania Saeed. Saleem revealed that Sania Saeed never says no to any social function and always comes out to support good causes and that is how he got his break too.