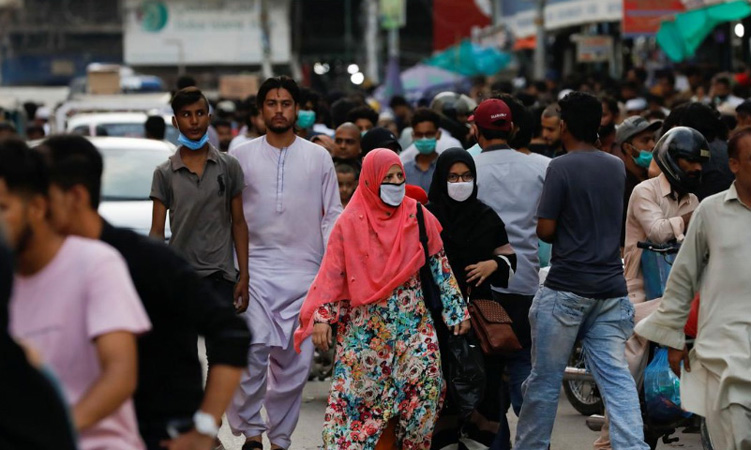 Four people were reported to have succumbed to Covid-19 in a day, whereas the positivity rate had reached 4%, according to the data released by the National Institution of Health (NIH) on Saturday. As per the NIH’s daily tally, 818 people tested positive out of the 18,305 tests conducted in the past day. At least 126 Covid patients remained in critical care.

According to the National Institute of Health (NIH), 818 cases were reported in the last 24 hours, up from 694 a day earlier. The number is the highest since March 3 when the country had recorded 953 infections in a day. The positivity rate also rose to 4.47pc from 3.93pc a day earlier. NIH’s data further showed that 18,305 tests were conducted across the country in the last 24 hours, while 126 patients were in critical care. During this time, four people died from the deadly virus.

Meanwhile, Karachi remained the most Covid-affected city in the country with the positivity of 17.06pc. In the last 24 hours, 3,095 tests were conducted in the city of which 528 came out positive.

Azad Jammu and Kashmir’s Muzaffarabad and Lahore followed with the positivity rates of 6.45pc and 5.58pc, respectively. In addition, Islamabad’s positivity was recorded at 4.05pc, while in Peshawar it was 2.47pc.

In a statement, Health Minister Abdul Qadir Patel called for the strict implementation of standard operating procedures (SOPs) such as wearing masks, maintaining social distance and sanitisation. He said that the chances of the virus surging were higher because of the upcoming Eidul Azha festival and advised people to avoid attending public gatherings, hugging or shaking hands with people.

Patel had also requested ulema to ensure social distancing inside mosques and in religious gatherings.

Separately, in a meeting on Friday, Sindh Chief Minister Murad Ali Shah received a briefing of the Covid situation in Karachi and instructed authorities to bring down the positivity rates before Eidul Azha. He directed the public to follow SOPs and get vaccinated. “Eidul Azha and Muharram events are coming up. We have to bring down the coronavirus positivity rate prior to these events. People should take precautionary measures and reduce the rate,” he said.

The chief minister warned that the government could be compelled to take stricter measures if the positivity rate was not reduced. Earlier, Sindh Health Minister Azra Pechuho had ruled out a lockdown in the city and instead suggested the return of certain protocols and curbs in indoor spaces, including the wearing of face masks and social distancing measures. “The city cannot be forced to go under another lockdown, which is why it is highly necessary that the community at large understands the importance of Covid SOPs and follows them,” a statement issued after the meeting quoted her as saying.

“Masks must be made mandatory for all indoor spaces, especially cinemas and the like so that there is not any more increase in infection. People are not taking precautions that they used to take which is another reason the cases of Covid-19 [cases] are increasing.”

Pechuho also hinted at higher number of cases than being documented suspecting that there was also a significant portion of the population who were using at-home antigen tests and isolating without informing healthcare workers. “Even though many people think that vaccines provide little resistance to new variants, they do provide some protection,” she added.

Earlier, medical experts warned that the spike in cases might turn into a sixth wave. Dr Saeed Khan, a professor of molecular pathology heading the Sindh Public Health Lab at the Dow University of Health Sciences (DUHS), said a new Omicron subvariant – the BA.5 – fast spreading in other countries had been reported in Pakistan, including Karachi, and now it was being locally transmitted. “While other [old] sub-variants of Omicron are also being reported in Karachi, this one is more contagious since it’s a new one and has been cause of concern in other parts of the world,” he said, adding that unvaccinated, the elderly and people with compromised immunity were particularly vulnerable. “If didn’t pay heed to medical advice and start implementing the Covid-related preventive measures seriously, the spike in cases might turn into the sixth wave of coronavirus,” he said.

According to Dr Khan, there are multiple reasons behind the fast spread of the variants. “They are genetically different, which help them transmit fast. Other reasons include waning of vaccine immunity after six months, reluctance on part of the general public to get a booster shot and absence of Covid-19 preventive measures at public places.”