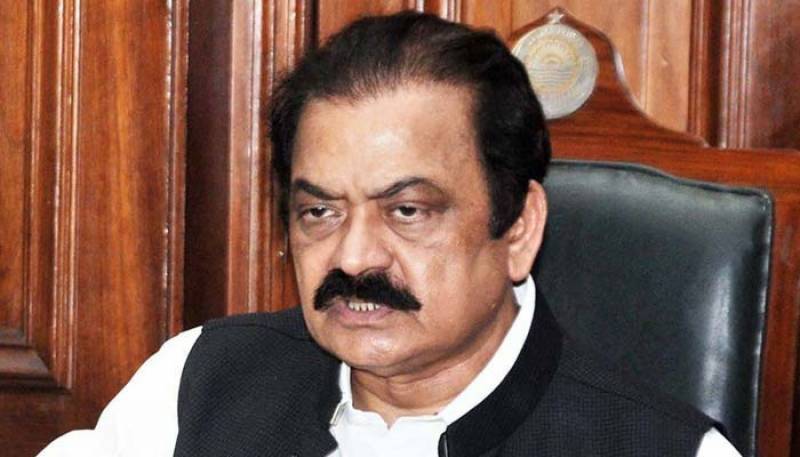 ISLAMABAD: Interior Minister Rana Sanaullah Khan, while paying tribute to the martyrs of police and other law enforcing agencies, said the existing peace and tranquility in the country was a result of their supreme sacrifices.

Addressing a ceremony held here on Saturday to distribute cheques among the families of Islamabad Police, he said the sacrifices of martyrs changed the destiny of nations, and nations which tended to forget their heroes, could not sustain for long.

The minister said that today’s ceremony was organized to acknowledge the splendid services and sacrifices the martyrs rendered for the nation, besides announcing that the government would look after their families.

He said they were our real heroes who laid their lives for ensuring maintenance of peace in the country and fought bravely against criminals and anti-state elements.

The minister said the previous government had unnecessarily been delaying the payment of dues and compensation to the families of martyrs for the last four years. Despite the financial constraints, Prime Minister Shehbaz Sharif directed to pay the pending dues worth Rs 1.22 billion to the martyrs’ families before June 30, 2022, he added.

Sanaullah said the nation paid a heavy price both in the economic and security terms during the war against terrorism as it lost 80,000 citizens and 12,000 law enforcers besides bearing a financial loss of over $150 billion to the national economy.

Regarding the increasing fuel prices, the minister said the government was cognizant of the hardship being faced by the people. It was due to the wrong decisions and policies of the previous government which at first signed an inappropriate agreement with the international lending agency and then opted for non-compliance with the pact, he added.

Sanaullah said there was imminent danger that the government might default, had the incumbent government gone for fresh elections. All political forces could jointly fetch the country out of the crisis, he said, adding, “We have to work together for progress and prosperity of the country.”

However, he said, Imran Khan alone was pushing the country towards anarchy and chaos. “Our country was achieved through a long struggle and unmatched sacrifices rendered by our elders, and we would not let anybody jeopardize it,” he added.

The minister appreciated the police team for carrying out a successful operation against the criminals who were involved in killing of DC Nauman Afzal and other heinous crimes.

He also directed IGP Islamabad to revive medals awarding programme to the police officials which was discontinued after 2018.