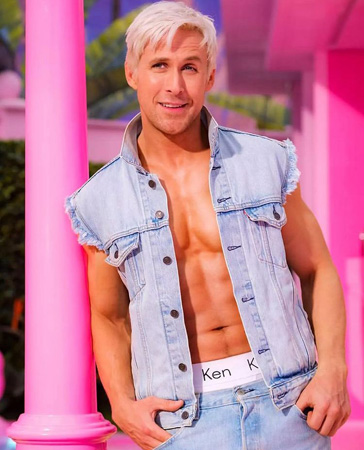 Barbie just might be saying “howdy” to the rodeo! Margot Robbie and Ryan Gosling finally united on set of the upcoming Barbie movie, as seen in the first photos of the co-stars together in costume.

Playing the iconic Barbie and Ken duo, the actors were seen dressed in picture-perfect Western attire, rocking matching cowboy hats and pink bandanas while filming in Brentwood, Calif. Margot, showing off her long blonde hair, wore a pink button-up vest and flare trousers with lace-up details. Meanwhile, a platinum-blonde Ryan was seen in a black cowboy jacket with white fringe and a floral pattern. The duo smiled and chatted with director Greta Gerwig, who also channelled Barbie’s style with a pink jumpsuit of her own. Though the cast has been hard at work filming, they still have time to rest up and re-caffeinate. On June 21, Margot was spotted behind-the-scenes of the Mattel-inspired movie, carrying an iced coffee.

The Suicide Squad actress has said she’s looking forward to putting her spin on the classic doll and wants to have a “positive impact” on children.

“Playing with Barbie promotes confidence, curiosity and communication throughout a child’s journey to self-discovery,” Margot previously said in a press release. “Over the brand’s almost 60 years, Barbie has empowered kids to imagine themselves in aspirational roles from a princess to president.” As for Ryan, he’s definitely got the support of his family as he steps into Ken’s famous plastic shoes. After Warner Bros. revealed a first look of him in character, his longtime love Eva Mendes re-shared it with a glowing review. “So. F. Funny. So. F. Good. So F excited for you to see this,” Eva wrote on Instagram, adding, “#Thatsmyken.” The movie is expected to debut in July 2023.