‘Mir Jaffars’ helped the US change regime in Pakistan 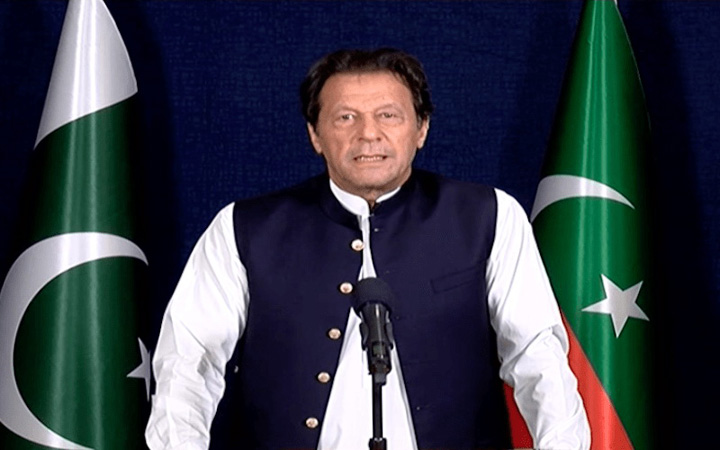 Imran Khan addressed a webinar organised by the Islamabad Policy Institute to highlight the impacts of the ‘regime change’ in Pakistan. The webinar was titled “Regime Change: Impact on Politics, Security and Economy”. He said that Pakistan was the sole sufferer of the regime change conspiracy and the nation is now being enslaved, a private TV channel reported.

The former prime minister said that the current situation has sparked a debate on what happened to the country. As per the economic survey, the national economy was improving during the PTI’s tenure. “Improvements were seen in the sectors of agriculture, industry and others during the PTI tenure. On what basis, our government was removed via a foreign conspiracy,” he said. “We were told that your government was ineligible to control inflation. At this time, the inflation rate skyrockets within just two months which was never recorded in the 3.5 years of the PTI government,” he maintained. “Who will be held responsible for forcing the nation to pay the price of the regime change in the shape of inflation and loadshedding. We are afraid that the country is going to face Sri Lanka-like economic crisis.”

Imran Khan said that the economic collapse of Pakistan will create the biggest challenge to national security. He stressed giving importance to economic security.

He alleged that the corrupt rulers imposed on the country managed to end their corruption cases worth Rs 1,100 billion. “Have the present rulers any interests in Pakistan? Those who fled abroad due to corruption cases want to return to Pakistan after getting another NRO.”

“I want to ask a question from those who are calling themselves neutrals. Is this your Pakistan or not? If there is an economic collapse in Pakistan then how do the neutrals save themselves from its disasters?”

The former premier said that Pakistan was the sole sufferer of the ‘regime change’ and the nation was being enslaved. He warned of severe consequences if the crisis continues in the country. “The United States (US) wants bases in Pakistan to use them for its own interests,” he claimed.

Separately, Imran Khan lashed out at the government saying that instead of buying cheaper oil from Russia, the rulers have burdened the poor masses with price hike, besides lambasting them saying they have given themselves a second NRO to the tune of Rs 1,100 billion.

In his tweet on Friday, Imran Khan said: “Instead of buying cheaper oil from Russia, (the) Imported govt brought in by US regime change conspiracy, continues to put unbearable burden on people while giving themselves NRO2 worth Rs 1100 bn. Total increase Rs 99 for petrol, Rs 133 for diesel. Join our protest against this tomorrow.”