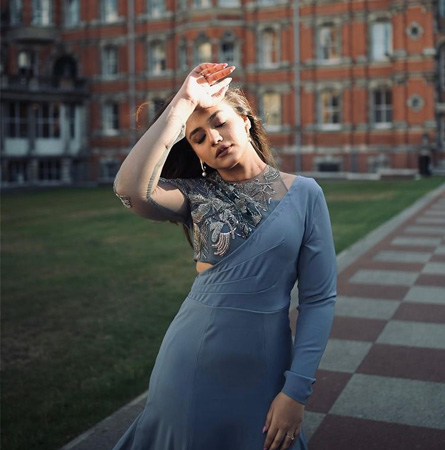 The ‘Parey Hut Love’ actor took to her official handle on the photo and video sharing social application to post a series of glimpses from the day, when Zara attended the ‘Rising Pakistan’ fashion and lifestyle event in Heathrow, London earlier this week.

Adding a ‘fun fact’ further, she noted, “it was @iamsrk [Shahrukh Khan] 30 years in the industry that day and I went to the place where some of the exterior of Mohabbatain has been shot. The love of SRK remains stronger. It was magnificent to see in tangible pieces to what I had only seen on tv.”

The actor also penned the lyrics of the title track ‘Mohabbatein’ in one of the post’s captions. Zara slipped in a grey custom-made floor-length gown from Pakistani designer Zuria Dor as she posed in front of the iconic building of Royal Holloway, University of London. The stylish outfit was complemented with grungy makeup and dainty jewels.

The viral posts shared by Zara Noor Abbas received millions of likes from the users of the social media application, while several showbiz celebrities the likes of Maya Ali, Zoya Nasir, and Komal Meer posted lovely compliments for the fellow actor.

YRFs romantic drama ‘Mohabbatein’ was released in the year 2000 and featured Shahrukh Khan and Amitabh Bachchan in starring roles with Aishwariya Rai. The Aditya Chopra directorial marked the on-screen debut of his younger brother Uday Chopra in Bollywood, along with three ladies, Shamita Shetty, Kim Sharma, and Preeti Jhangiani.