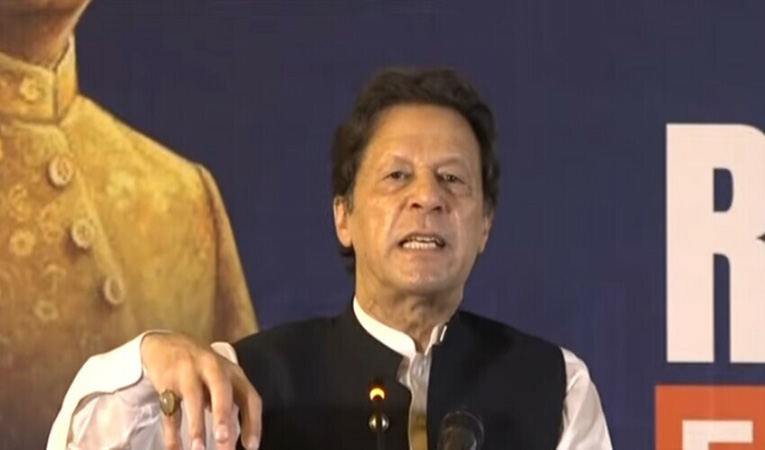 Former prime minister and Pakistan Tehreek-e-Insaf (PTI) Chairman Imran Khan on Thursday requested the Supreme Court to issue a restraining order against the decision of the Lahore High Court regarding recounting in Punjab CM’s election.

Giving policy statement on the constitutional crisis in Punjab, he said, “I want to congratulate nation because we all knew that the election of the Chief Minister of Punjab was unconstitutional and Hamza Sharif had no right to be the chief executive of the province for so long.”

Commenting on the verdict pronounced by Lahore High Court (LHC) regarding the election of Punjab Chief Minister slot, Imran Khan said that there is no clarification in this decision and also expressed fear of constitutional crisis to deepen if the clarification does not come and under which law Hamza Shahbaz can remain CM.

The PTI chairman appealed to the apex court to issue stay order on Friday’s election, adding that six members of the PTI are in Saudi Arabia for Hajj pilgrimage. The former PM also raised question on the fairness of elections under Hamza Shahbaz and said that the LHC verdict proved that Hamza Shahbaz was an unconstitutional CM.

Earlier, Imran Khan while addressing an event of the Islamabad High Court Bar Association (IHCBA) had announced to challenge Lahore High Court’s verdict over Punjab Chief Minister election in the Supreme Court. He said the biggest discussion in the country at the moment was the ‘regime change conspiracy’, as the country that was once a growing economy was facing economic devastation in a few weeks. He claimed that ‘interference’ in the Punjab by-election was in full swing and the candidates were being threatened on phone calls from unknown numbers to not run on PTI tickets.

Imran said at least two PTI ticket-holders had informed him about the threatening calls they had received from unidentified numbers.

He said the Election Commission of Pakistan (ECP) was going beyond lengths to stop notification of PTI members on reserved seats.

He said earlier in the National Assembly, PTI MNAs received ‘phone calls’ before parting ways with the party.

He said the first two years of PTI’s government were tough, but the country was put on the track to sustainable growth after years, says a news report.

“I knew about the conspiracy being hatched for a year, but my mind was not ready to accept that Shehbaz Sharif would be made the prime minister and Asif Zardari would come into power again.”

Imran reiterated that he had informed the ‘neutrals’ that the ouster of his government through conspiracy would dismantle the country’s economy.

Without mentioning who he was referring to, Imran said, “May be ‘they’ were thinking that Shehbaz Sharif would turn the economy around like he showed in the advertisements [as chief minister].” He asked, “Who will take responsibility for Pakistan’s current condition now?”

He said through NRO-1, the public wealth looted by corrupt leaders was pardoned.

Imran said President Dr Arif Alvi had written a letter to the Supreme Court for a probe into the ‘conspiracy’ and emphasized that the apex court should look into it and identify the local abettors to save Pakistan from such incidents happening again in future.