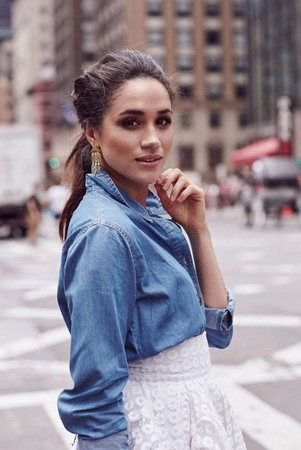 Meghan Markle and Prince are making headlines after they were spotted driving to Oprah Winfrey’s house, sparking rumours of another explosive interview with the American TV legend. Photos published by Daily Mail show Harry behind the wheel of his Range Rover with Meghan taking the back seat, with a woman believed to be Janina Gavanar.

In one of the captions, Janina was introduced as an Iranian activist who would look after the growth and day-to-day operations of the coup’s charity.

The caption prompted a quick reaction from the couple’s friend Omid Scobie.

“As much as the Mail would love to trigger its readers with the words “Iranian activist”, the woman in this photo is actually actress Janina Gavankar.”

Gavankar was born in Joliet, Illinois, to Mohra Gavankar, who immigrated to the US from Punnam, Andhra Pradesh, India – she is half-Indian and half-Dutch- and Peter Ganesh Gavankar, an engineer from Mumbai, who travelled to the US to pursue a master’s degree. Gavankar is trained as a pianist, vocalist and orchestral percussionist.