* Before and after photos of the crystal-encrusted dress, which the late Hollywood icon famously wore in 1962 to sing 'Happy Birthday' to John F Kennedy, were posted 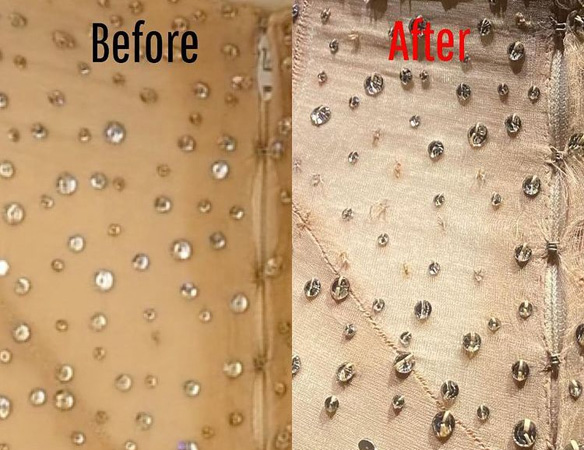 Call it Dressgate 2.0. Kim Kardashian already faced much criticism for wearing one of Marilyn Monroe’s most famous gowns to the Met Gala.

This week, more than one month after the event, newly posted images of the garment, taken by visual artist and museum and costume exhibit curator Chadmichael Morrisette, show it has signs of damage.

Before and after photos of the crystal-encrusted dress, which the late Hollywood icon famously wore in 1962 to sing “Happy Birthday” to President John F Kennedy, were posted on the Instagram page of private collector the Marilyn Monroe Collection on June 13. In the new images, the dress’ back closure shows puckering and pulled seams.

The Ripley’s Believe It or Not! museum in Orlando, Fla. had purchased the dress at a Julien’s Auction for a Guinness Record-breaking $4.8 million in 2016 and gave Kim permission to borrow and wear it, which she did when she walked the red carpet with boyfriend Pete Davidson at the Met Gala. It is now on display at the Hollywood branch of the museum.

Kim initially struggled to put on the dress. “I always thought was extremely curvy. I imagined I might be smaller in some places where she was bigger and bigger in places where she was smaller,” the SKIMS founder told Vogue. “So when it didn’t fit me I wanted to cry because it can’t be altered at all.”

Kim told the magazine she is “extremely respectful to the dress and what it means to American history,” adding, “I would never want to sit in it or eat in it or have any risk of any damage to it.” Amanda Joiner, Vice President of Licensing and Publishing at Ripley Entertainment, told The Daily Beast in May that they had two dress fittings for Kim, adding, “The biggest challenge that we had is that we really wanted to make sure that we kept the integrity of the dress and the preservation, because it’s 60 years old and we feel that it’s such an iconic piece of fashion.”

She added, “We always ensured that at any time we felt that the dress was in danger of ripping or we felt uncomfortable about anything, we always had the ability to be able to say we not were going to continue with this.” On Instagram, the museum wrote that “no alterations were to be made to the dress and Kim even changed into a replica after the red carpet!”

The Marilyn Monroe Collection wrote on Instagram, “So much for keeping ‘the integrity of the dress and the preservation,’ @ripleysbelieveitornot, was it worth it?” E! News has reached out to Kim’s rep for comment and has not heard back.

Despite keeping the original dress on at the Met Gala for “for a matter of minutes,” per Vogue, Kim drew criticism for wearing the historical outfit, from fans and from the gown’s designer, Bob Mackie, who told Entertainment Weekly that nobody but Marilyn “should be seen in that dress.”

Kim was also criticised when she said she lost 16 pounds in three weeks to fit into the dress. She later defended herself by saying she “didn’t do anything unhealthy.” “To me it was like, ‘OK, Christian Bale can do it for a movie role and that is acceptable.’

Even Renée Zellweger gained weight for a role,” Kim told The New York Times. “It’s all the same to me. I wasn’t saying, ‘Hey everyone, why don’t you go lose this weight in a short period of time?'”