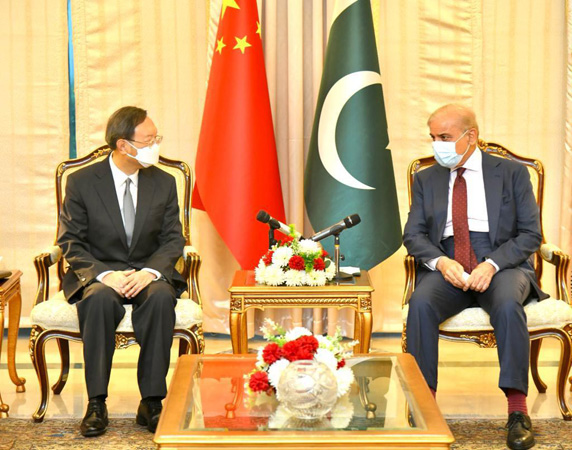 Prime Minister Shehbaz Sharif Wednesday said that China Pakistan Economic Corridor and the growing economic linkages had deepened the roots of the abiding friendship between the peoples of Pakistan and China.

“Atop this unshakeable foundation, the Pakistan-China partnership would continue to play its valuable role as a factor of peace and stability in the region and beyond,” the prime minister said during a meeting with Yang Jiechi, Member of the Politburo of the Communist Party of China (CPC) Central Committee and Director of its Foreign Affairs Commission, who called him.

The prime minister said that Pakistan stood ready to work closely with China for realizing both countries’ shared vision of connectivity, prosperity and public well-being.

Pakistan would also continue to support Chinese investors with competitive incentives, access to high-quality infrastructure and unwavering security arrangements, he added. Director Yang Jiechi is accompanied by Vice Ministers for Foreign Affairs and Commerce, Vice Chairman of the China International Development Cooperation Agency (CIDCA) and Deputy Secretary General of China’s National Development and Reform Commission (NDRC). The prime minister underscored the significance of Director Yang’s visit for accelerating the implementation of the leaders’ consensus on further enhancing bilateral relations across all domains. He highlighted that economic cooperation had become a mainstay of the wide-ranging Pakistan-China partnership. He expressed satisfaction at growing bilateral trade and financial linkages, with China’s unstinting support playing an invaluable role in helping Pakistan offset external shocks to the global economy and demonstrating the continued resilience of Pakistan-China cooperation at a time of heightened uncertainty on the world stage.

The prime minister particularly thanked China for renewal of the RMB 15 billion (US $ 2.3 billion) syndicate facility. The prime minister also thanked China for its support and assistance to Pakistan’s efforts towards preventing the spread of COVID-19 pandemic by providing millions of vaccine doses as well as protective and medical equipment.He underlined that as a flagship of the visionary Belt and Road Initiative (BRI), CPEC had transformed Pakistan’s economic base and strengthened capacity for self-development. He reaffirmed the government’s resolve to accelerate the pace and complete CPEC projects at the earliest. The prime minister also underscored the high importance Pakistan attached to the strategic ML-I and other key projects including Karachi Circular Railway (KCR), Babusar Tunnel, and desalinization plant in Karachi. The prime minister reiterated his strong condemnation of the Karachi terrorist attack and underscored Pakistan’s determination to bring the perpetrators to justice.