* Ahmer's latest work displayed at Ejaz Art Gallery, Lahore, presented a tribute to the 'forbidden' relationships in an Islamic society in particular 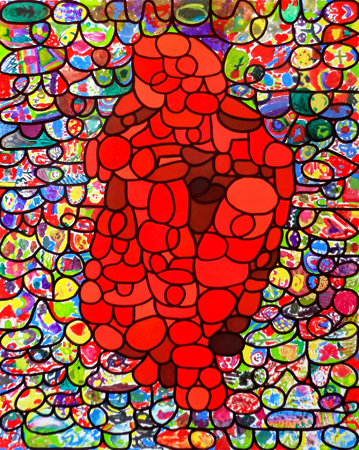 The contrasting colours, striking silhouettes and the hidden messages have become synonymous with Ahmer Farooq’s modernistic approach to art.

Paintings use an array of shapes and colours to present a view of humanity that some might not want to face, yet can’t shut their eyes from it. The celebration of sexuality, gender fluidity and of life itself is mesmerisingly presented in his art. The art on display is a threatening tribute to the constraints human beings place themselves and each other under in the modern cultural landscape. His work displays not only a mastery of strokes but also control the artist has on his technique; The lines merging into curves, to convey the sobriety and emphasized in areas to portray the magnitude, captivates its viewer. What seem like lines and shapes are a play on Arabic and Sanskrit script, bringing a uniqueness to Ahmer’s art. Highly stylized calligraphy adds to the aesthetic appeal. The work that seems simple yet requires a mastery of its own. Ahmer captures the concepts of dominance, domesticity, forbidden emotions, unlawful attractions and plethora of contradicting emotions in his work.

Ahmer’s latest work displayed at Ejaz Art Gallery Lahore, presented a tribute to the ‘forbidden’ relationships in an Islamic society in particular; where acceptability is exclusively reserved for heterosexual relationships and that too a marriage contract. Figures intertwined on the canvas screamed of loneliness, shame, self-loathing and fear and longing for passion, love and desire.

Ahmer uses his art to speak up for the rights of downtrodden, the minority. He has raised his voice against dowry through his patchwork quilts, he is a champion of women’s rights and has highlighted issues related to domestic abuse, unpaid housework and suppressed voice and choice.

Most of Ahmer Farooq’s work is on large scare which leaves an impact on the viewer the moment they come face to face with the artwork. The artwork draws you towards itself until it fills your entire vision and submerge you in it. You feel like you could stand there for hours. Just like our society, work seems perfectly balanced and whole, yet nothing is in right proportions. Your eyes stared into the mix of colours and your vision pushed inwards, like you are into a fractal.

Farooq’s work speaks about ‘forbidden’ relationships in Pakistan and how society reacts to it. All sorts of relationships are part of our society which are outside the acceptable definition of heteronormality and his works highlight that part. He uses his art to start an uneasy dialogue with the viewer.

His works are hard to miss, in your face, nearly narrative in that they imply a back-story to unseen and unheard emotions and feelings. Ahmer’s paintings are full of emotion provoking colours and flowing lines add perspective so that one has to shift back and forth to see what fits together, where and how. It’s as if the scene itself is uneasy. In some works, when you move back from the artwork you see a different image and the closer you get to the work you will see a different prospective. So, it’s like having two stories going on side by side in the same painting just like our society.

His work titled ‘missing love’ speak about a missing lover. When you look at the painting you will see pretty and easy on the eyes colours. However, when you look closely you will notice a missing part in the artwork, a void. Depicting the missing lover in a closeted relationship due to non-open society. Even though these relationships are not acceptable in our society, but they do exist and people involved in it bound with each other with real emotions and feelings.

Another work titled ‘Unnamed III’ speaks about a ‘love triangle’ and how it effects all the parties involved in it. The artist has used bright colours to depict the deceptive image people in such relationships have to portrait to be accepted in the society. There is a following text all over the artwork which tells a story of this relationship. The viewer will only see the flowing line and a hint of abstract Urdu text, as we see such relationships in real life. Details of such relationships are at the discretion of people who are living it, we will only know how much they want the outside world to know about it.