* Set in modern-day Karachi, 'Lafangey' revolves around the lives of four out-of-luck youngsters who dare to spend a night at a mysterious house 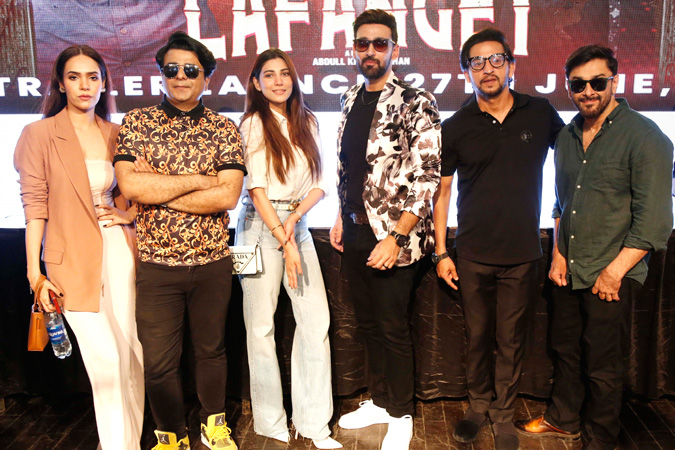 At a time when both the film and cinema industry in Pakistan is going through a tough time, the trailer release of Lafangey can be seen as a welcome change.

The film is not just a horror-comedy that might revive the stagnant genre but is also set to give a tough competition to other films on Eidul Azha, considered the most profitable period of the cinema calendar.

Set in modern-day Karachi, ‘Lafangey’ revolves around the lives of four out-of-luck youngsters who dare to spend a night at a mysterious house that might or might not be haunted. The guys encounter both natural and supernatural beings during their stay but remain adamant, leading to hilarious situations that occur within the vicinity, especially after dark.

Produced by Tariq Habib Rind at Al Wafiq Studios, Written and directed by Abdull Khaaliq Khan and co-written by Jahangir Hussain and JK Reddy, Lafangey boldly goes where not many filmmakers would dare to go in Pakistan. Not only does it deviate from the successful romantic-comedy format but also dares to stand to big-budgeted Hollywood and Pakistani films like Thor: Love and Thunder, London Nahi Jaunga, and Quaid-e-Azam Zindabad. With its relatively lesser budget, it is likely to change the mindset of the filmmakers and make them more dependent on good content, instead of a big budget.

Featuring an ensemble cast including Sami Khan, Nazish Jehangir, Saleem Meraj, Mani, Mubeen Gabol, Behroze Sabzwari, Gul e Rana, Ismail Tara, Tariq Habib Rind, Waqar Ali Godra and child star Hoorain, Lafangey is all set to make a mark at the box office this Eid ul Azha. Veteran actors the Late Sohail Asghar and Late Rasheed Naz, who passed away during the making of the film will also be making their final appearances in this film.

The story may revolve around comedy and horror genres but its biggest draw will be its special effects, which are prominently visible in the trailer. The title track which was launched a couple of days before the trailer shows that the film has everything for everyone. Add to that Sonia Nazir’s sizzling item number and the temperature is likely to rise inside the cinema when the film is eventually released on Eid day.

The writer/director of Lafangey, Abdull Khaaliq Khan believes that his film is good enough to stand its ground during the festive season and will breathe life into a genre that has stayed ‘dead’ for a long time.

‘Not many horror-comedy films have been produced in Pakistan in recent years and that’s why chose to revive a genre that is quite popular around the world.

The film features both the seniors and the rising stars in the country, and includes those actors who should be doing films for the big screen. I am hopeful that people will visit cinemas during the Eid holidays and watch our film, because we have put in our heart and soul in it, literally.’