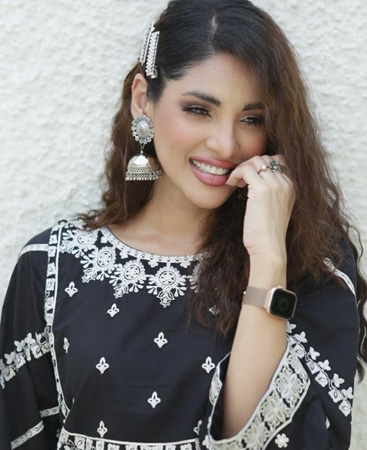 Actor Zhalay Sarhadi shared a new TikTok video which is going viral across social media. ‘Jalaibee’ actor turned to her Instagram handle, Tuesday and shared a hilarious TikTok video on the feed, which sees her lip-sync a comic script ‘Defence defence hai bro’ by another user. “Is this sarcastic????” she questioned in the caption of the video.

The viral reel, watched by thousands of Instagrammers, in a few hours received a number of hearts and applauding comments for the artist.

“Too good yar,” commented one of the followers. Another remarked, “Kaafi energetic hyn ap (You’re quite energetic),” while many of them simply dropped laughing tears emoticons in the comments section.

Sarhadi is quite consistent with the content on her social media handles with millions of followers. Her TikTok videos are admired by her followers and they keenly wait for her to share new ones.

Earlier this week, she posted a bunch of other funny TikTok videos on social media, one of which also featured her cat.

Apart from being immensely popular on social media, Sarhadi has made herself a household name with her brief acting stint. The actor received acclaim for notable performances in drama serials ‘Rang Laaga’, ‘Badnaam’, ‘Khoat’, ‘Mera Saaein’ and ‘Aks’ among others. She essayed a pivotal role in the film ‘Jalaibee’ as well.